The earliest reference we can find of the pub dates from 1864, when it was being used as the venue for a meeting of the Royal Lord Belgrave Lodge of Oddfellows. In those days it was called the Talbot Inn. We don't know when the name was changed, but by 1890 it had become the Grosvenor Arms, and a third floor had been added. It subsequently became the Grosvenor Arms Hotel. 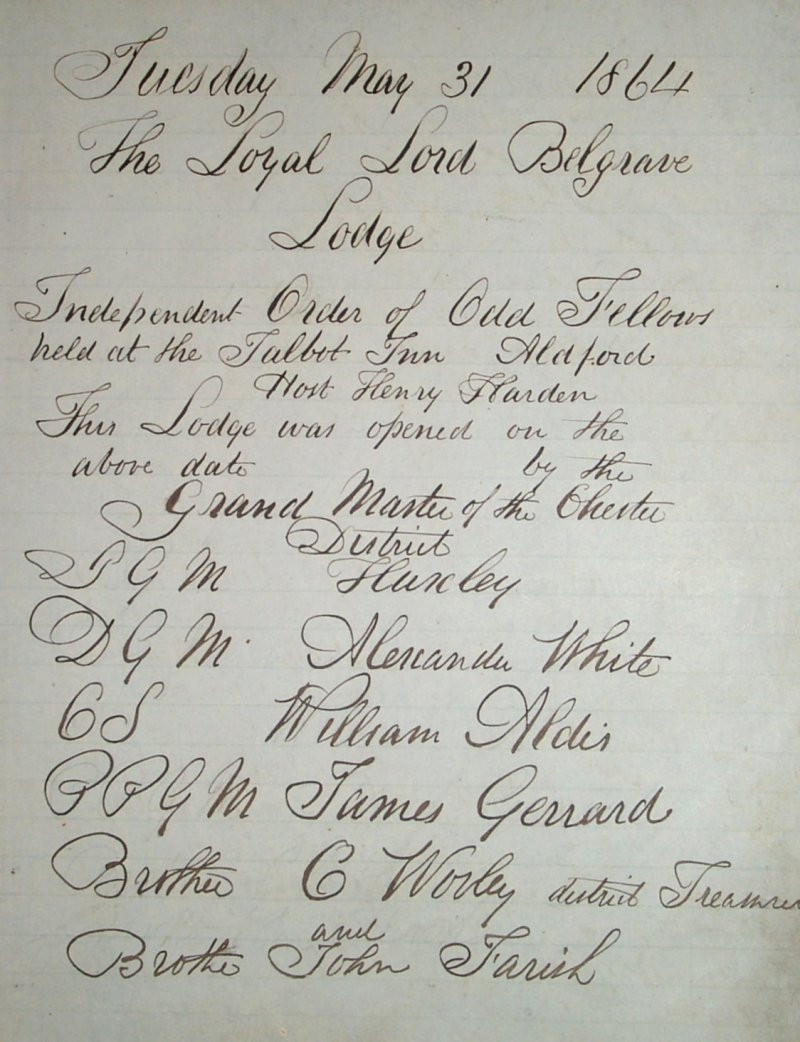 A meeting of the Royal Lord Belgrave Lodge
of Oddfellows

The pub went through a purple patch in the sixties and seventies under the aegis of Ted Roberts, when the great and the good of Cheshire used to flock there. 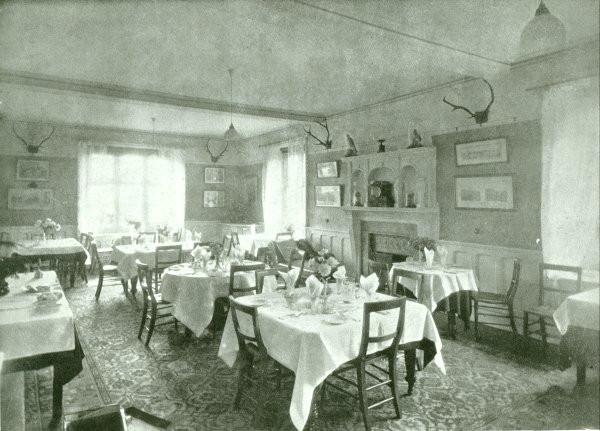 This room is now the library.
The fireplace is now a door 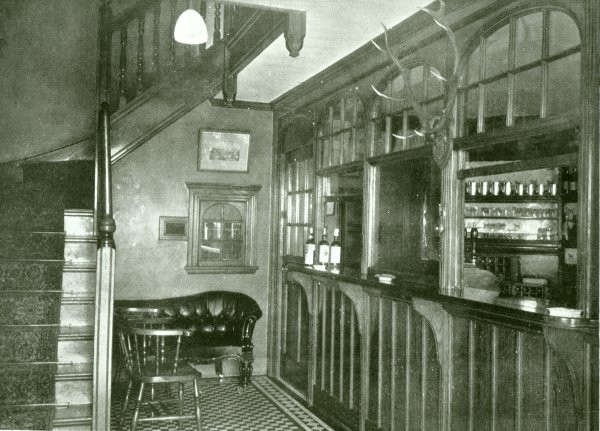 The entrance hallway. The stairs have gone,
but there's still a bar

The Grosvenor was the second pub that we opened in the Chester area after Harkers, and it was one of the 'white elephant' sites that we seem to be fond of - when Jerry and Graham first looked at it, it was shut up and in a sad state of repair. It was damp, musty and unloved. The story of how we got it is great - Allied Lyons had the lease, but had seriously failed to maintain the property, which they were contractually obliged to do. They were looking to sell the lease on for a hefty amount, but by dint of some hard-ball negotiating, they ended up paying us £60,000 to take it off their hands - a sweet result. The Grosvenor estate, who owned the property, have proved to be lovely people to do business with, and share many of our core values. Part of the Grosvenor estate

Many people thought we were bonkers to spend so much on a site with such a history of failure, and of course we're very pleased it has proved to be so successful. Amazingly little has changed in 110 years,
apart from the addition of the flat roofed
annex on the right of the building

Anyway, the building is not that great - it was designed by a famous local Victorian architect called John Douglas. People rave about his work and there are all sorts of societies and individuals devoted to preserving the buildings he designed, but Jerry for one thinks he was an architectural vandal. He destroyed many of the fine medieval buildings in and around Chester in the name of progress, re-facing them with fake black and white timbering and often simply demolishing the original. His designs are made to look good from the outside but are often impractical, with windows you can't see out of and doors in the wrong place. Jerry should know because he lives in one. Still, John Douglas wasn't alone - the Victorians were generally arrogant when it came to building, believing that the past was worthless and just had to be replaced with the new and the modern. It all happened again in the 60's. Plus a change...etc.

Justin came to us from a successful career in the motor trade, but after 18 years it was time for a complete change. He is a natural host and genuinely enjoys looking after people, dashing about the place in a whirlwind of enthusiasm. Justin is married with two boys, and when he isn't running around the pub, he runs up and down hills.

In a previous decade Dave would have been hanging out with the Beachboys. Being of an aquatic nature, he has taught windsurfing and water-skiing in Greece and Australia for 4 years. He did a bit of work in his local boozer in Kelsall when he got back from abroad, liked the job, joined us and the rest is history. Dave can now be found spending any free moments he has riding one of his many bikes, whether it be road or mountain.

Kevin's CV said he came from Newcastle which instantly secured him an interview, it was a surprise however when he greeted us with an Australian G'day rather than a Geordie Howay and it was then we realised our mistake. Kevin's path to the UK was all due to the love of a good woman, Kevin's path to the Grosvenor was all due to the love of wine and good food. He has also told us he is a class act on the dance floor, we can't wait to see his moves.

Sam is the first assistant we have had who has gained all his experience before accepting the job. He graduated with two degrees from York. A first class honours with distinction in drinking, partying and socialising, (similar to Millie) and whilst he was there in his spare time he picked up a BA in Criminology. Whilst at the Grosvenor he has worked as a KP, Chef, Cellarman, and front of house before deciding to take it all seriously and join the management team and put both of his degrees to good use.

Millie joined us straight from the Pant Yr Ochain University, (as did Justin, Ollie , John and Tom) graduating early with a first class honours degree in socialising, wine appreciation and organisation. She is affectionately known as "pocket rocket" because she can work twice as fast as everyone else and make it all look effortless, this is quite fitting as her husband flies jets so he is the only one who can keep up with her. It is great to have her at the Grosvenor.

Sally first walked through our doors looking for a part-time job whilst her children were at school. Now, 28 years later, her children are all grown up and she is very much part of the furniture. Sally enjoys a good pint of G&T, and is currently working her way through our ever growing collection of gins, she assures us this is for research for our customers!

Stuart's hobby is cooking, so he is in his element. He hails originally from the town renowned for a world class rugby team, St Helen's, and remains a keen supporter of Saints RFC to this day. He plays squash (all be it not since 2006) and enjoys the odd game of golf, believing that you should get as many swings for your money as you can. Stuart is married with two children.

Amy worked front of house at the Wharf before she won their 1st birthday baking competition and was asked to work in the kitchen. She then decide to work at Red Fox, with promises of gin and cider, and now she has made her best decision in deciding to come and work at The Grosvenor (with promises of even more Gin and Cider).

John, or more correctly Mr Welsby, has joined us from the Pant where he secured his legendary status. Never afraid of hard work, John works just as hard at home as he does at work. He has a lawn so big it takes all day to mow it, then when he has a day off he often pops back to Telford to watch his favourite football team play at home. John is known for having an encyclopedic knowledge of bus timetables, trains and football facts. 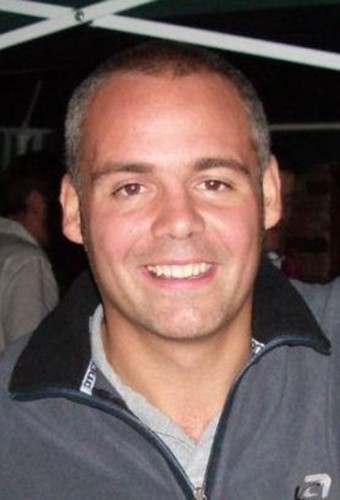 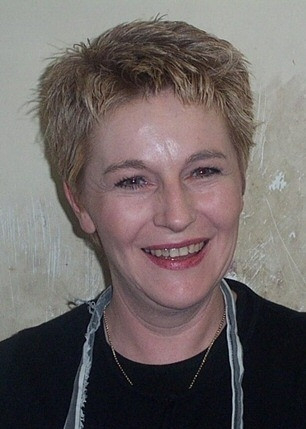