The Haycutter is situated in the beautiful surroundings of Broadham Green, nestling between Oxted, Hurst Green and Tandridge in Surrey.

Oxted is a town and civil parish in the Tandridge district of Surrey, England, at the foot of the North Downs. The town is located around 9 miles south-east of Croydon in Greater London, 8.5 miles west of Sevenoaks in Kent, and 9 miles north of East Grinstead in West Sussex.

Oxted appears in the Domesday Book of 1086 as Acstede, meaning 'Place where oaks grew'. It was held by Eustace II of Boulogne. Its Domesday assets were: 5 hides, 1 church, 2 mills worth 12s 6d, 20 ploughs, 4 acres of meadow, pannage worth 100 hogs. It rendered £14 and 2d from a house in Southwark to its feudal overlords per year.

The original village of Oxted (now Old Oxted) is a small village centred on a short high street with four pubs (The Old Bell, The George Inn, The Crown Inn and The Wheatsheaf ) just off the A25. Oxted's oldest church, St Mary's, which still provides services, was built in a field, upstream from and north-east of the medieval heart of Oxted, near Master Park and the railway station. The Grade I listed church dates from at least Norman times and stands on a conspicuous mound. 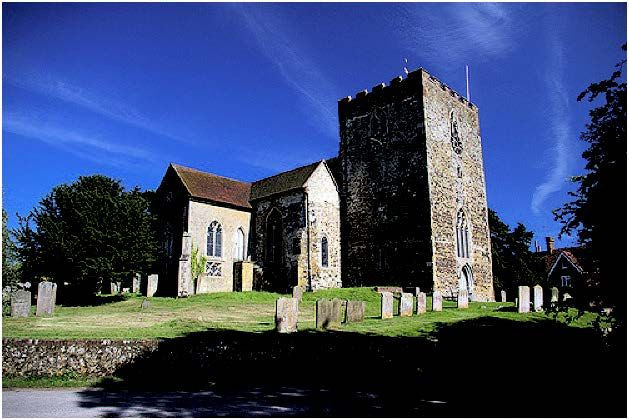 With the arrival of the railway in 1884 (after many years' delay caused by lack of funds) Oxted boomed in line with London's trade growth around its station, and new buildings created "New Oxted". These new buildings were built in the Tudor style, particularly with stucco frontages. All Saints Catholic Church was built in 1913-1928 designed by Arts & Crafts architect James L. Williams; The United Reformed Church's building followed in 1935, which is listed for its coloured glass and Byzantine design by architect Frederick Lawrence.

In 2011 The Daily Telegraph listed Oxted as the twentieth richest town in Britain.

Oxted is one of the few Surrey towns to retain its town brass band, Oxted Band, which has been a fixture within the town since 1901. 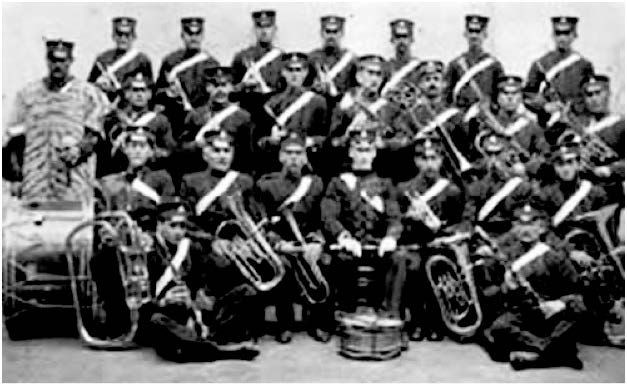 Oxted is host to a charity pram race held annually, which started in 1977.

Since the 1970s businessman Mohamed Al-Fayed has lived at Barrow Green Court and farm near Oxted.

Palaeontologist, TV presenter and author, Alan Charig lived in Oxted from 1958 until his death in 1997.

It's easy to understand why making hay was one of the most dreaded tasks on the farm in the early 1700s. It had to be hand-cut with a sickle or scythe and hand-raked with a wooden rake or fork. On a good day, a farmer could harvest 1 acre of hay. (At this point we expect some of you to have drifted off into daydreams of a bare chested Poldark).

A Haycutter is the type of knife used to cut the hay once it's already on the rick. It's around 2 foot 6 inches long, with a broad blade and an 18 inch wooden handle.

John Worsfold was born in the pub in 1945 and tells us that a Haycutter hung in the bar area of the pub for as long as he can remember. He believes the pub was called as such, as the field opposite the pub was flooded each year as a 'flood meadow'; it was then cut to provide hay for the cows that were farmed by Mr Harling, who lived 2 doors up from the pub on 'Harlings Row'. The farmer was said to have had 2 sons, he built one a butchers shop next to the farm and next to that a pub for the other son to run.

Our depiction of a man cutting grass to make hay is actually using a slightly different implement used to cut the grass whilst in the field. This Haycutter comes from Clare Leighton. It's a wood carving called 'scything' shown in a book called 'Four Hedges' from 1915. 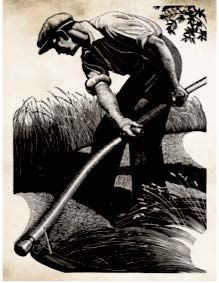 Leighton sketched landscapes and lower-class workers, developing an affinity for portraying rural life. In her later life, she moved to America where she died in 1989. Her nephew, David Leighton, has very kindly allowed us to use this beautiful image.

Our pub dates back to 1851. We believe it to be the only pub in the country to be called the Haycutter. At the turn of the century its landlord was William Worsfold (pictured left) and after him his son, also William or Bill as he was known (pictured centre), who took over before going to war.

John Worsford (whose brothers are in the picture above right - Bill on the left and Brian right), has very kindly given us this account of his family's history within the pub, along with some beautiful pictures that you can see hanging on our walls.

The Worsfold family originally came from the south east coast of England. Grandad was one of 13 boys and my father (William) was born in 1901 in Folkestone. Shortly after that my family took over the Haycutter pub at Broadham Green, Oxted. Grandad continued to run the pub until 1926.

At about this time my father met my mother (Elsie) in the George Pub at Old Oxted, which at the time was run by her sister and brother-in-law. They married and took over the license of the Haycutter. The first thing my mother did was to throw out all of the spittoons, which at the time were part of pub life.

Between 1926 and 1932 they had four children, Mary, William, Brian and Sheila. I was an afterthought 13 years later - in 1944 Dad returned to the Haycutter on leave, and I was born in January 1945. After the war he would lift me up in the bar and exclaim that I was his "war effort".

During the war my mother ran the pub, and strangely she never drank, or smoked. Also at this time the Canadian Service Men billeted around the Oxted area ready for the D Day landing. Our skittle alley was used as their armoury. We were on a direct route to London and so bombs were dropped nearby and one of the last doodle bug bombs exploded and fell into the field opposite the pub and blew out all of the pub windows.

My parents ran the pub up until my father died in 1957. After his death my Mother, with a bit of help from me, ran the pub until 1963 when my brother Brian took over with his wife Jean; they ran a very successful business until they left for Australia in the mid 1970s.

John tells us that the pub survived two separate fires. The first from embers dropping through the grate in the fireplace in the bar and setting fire to the pub from the cellar up, resulting in the fireplace now being held up with a brick pier. The second was the result of one of his brothers falling asleep with a cigarette in his mouth. Happily, the pub survived both.

For years our pub housed a skittle alley, which was believed to be the only one of its kind in Surrey. The alley was hugely popular in the 70s when Pauline Wells worked here for Ted Reeves and his wife Jean. Pauline tells us that at that time the pub was thriving; the skittle alley was always booked up and customers enjoyed sausage rolls and crusty bread while they played. The pub boasted their own darts team that met in the public bar to the right of the front door on a weekly basis.

Ted sounds like the archetypical Landlord. He sold used cars as a side line, drank many a lock-in with his regulars, who he would bar as a regular occurrence - only to greet them again fondly the next day unawares. Jean's dad 'Pop' lived with them above the pub. Pop would tend the cart of flowers in the front garden and grow vegetables in the back garden that were served from the pub's kitchen.

For its day the Haycutter had a great food trade, with around 100 covers enjoying a fresh but limited menu of steak pie and Pop's new potatoes, homemade curry or scampi and chips. None of the diners appeared to be put off by the outside (and very draughty) toilets that were situated at the back of the pub.

Of late the pub experienced difficult times competing against others in the area and closed in 2015. At one point, it looked as if the locals would lose their village pub to developers, so they heroically petitioned and won status as an 'asset of community value' which meant that it couldn't be used for an alternative use.

We are thrilled to have discovered it and are indebted to the local community who offered us huge support so that we could return it to its former glory.

Chris has been part of the Brunning and Price family for forever. He began life as a chef in the Old Harkers Arms in Chester, 23 years ago. He then hung up his apron and moved behind the bar to manage the Hare in Langton Green from 1996 and then onto the White Hart in Sevenoaks in 2009. He has a passion for food and working long hours, but he is way over thirty now, so finds it harder to keep up with the rest of the crew. He is married to the lovely Lisa who is a dental assistant and they live with their elderly dog Chester and totally nuts Cockerpoo puppy Noodle. When not in the pub Chris has found a new passion for Motor GP - making it his ambition to travel to each of the 21 venues around the world. He's not doing too badly at 7 with plans for Austria ticking the number 8 box. He's also a bit of a Manchester United fan on the side, attending matches whenever he has a free weekend - which is generally never.

Phil is our organisation fanatic. He loves writing lists, facts of the day and all things to do with beer. Away from the pub he enjoys travelling to the States, snowboarding and attempting to beat Ed at golf, or so Ed thinks...

Shane has worked all over the world including a long stint in the top kitchens in his native Australia, where he honed his skills in fine dining. Having worked for some of the top chefs In the UK he knows his way round British fayre and now heads up our kitchen. Family man at heart, Shane spends all his spare time with his lovely wife Caprice and their two children Croyde and Silver.

As well as being our Sous chef, Dan is studying towards a Law Degree, impressive! He has some great ideas for our menus and is a real hard worker, you will never catch him taking a break. He is a very bubbly guy and is bound to put a smile on your face.

Matt started his chef career in the busy kitchen of his local pub where he found his fondness of all things sweet on the pastry section! Having worked for Shane in the past he's earned his stripes and will now be heading up the larder section. Matt's a keen gamer so if he's not in his whites he's probably online. 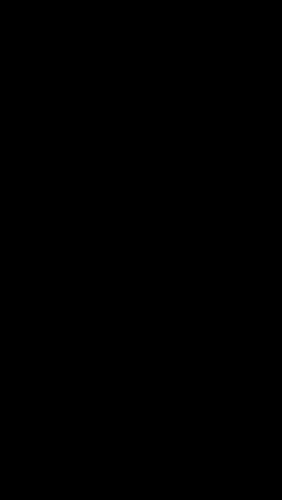 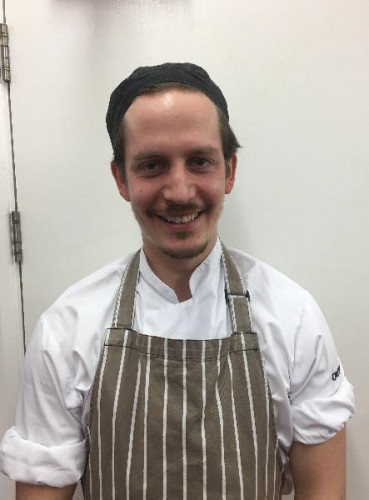