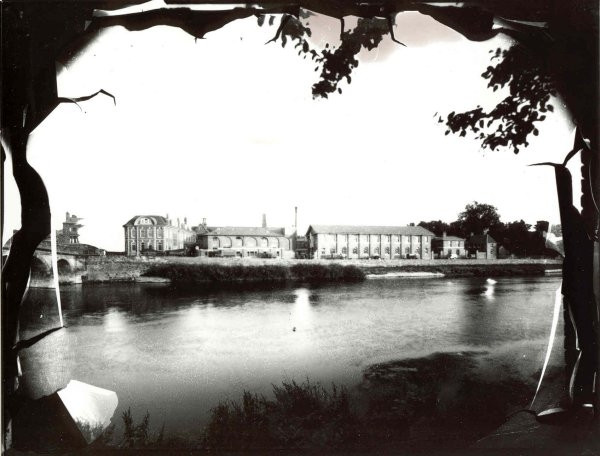 The Armoury is quite a grand building that started life as an Armoury (strangely enough) in the late 18th century, although it originally wasn't situated on its present site at all. The whole building was moved lock, stock and barrel (to use an appropriate metaphor) in 1922, from the Armoury Gardens, because immediately after the First World War, building materials were hard to come by, and they recycled what they had. It has served various purposes in its life, having most recently been a bakery. 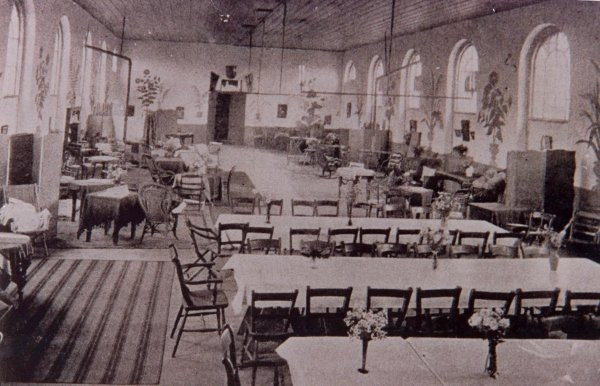 After the war the Armoury
was used for convalescence 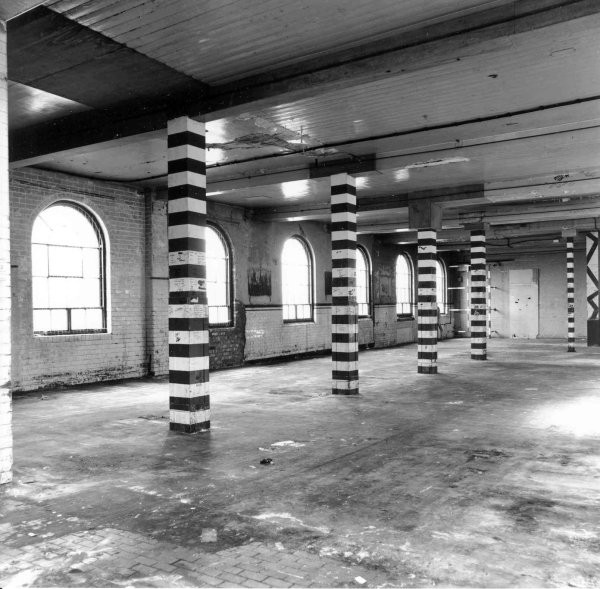 When the Armoury was a bakery
the pillars were striped as a
warning to fork-lift truck drivers.

Jerry and Graham have always liked Shrewsbury, and one day had a wander round the city checking the lie of the land, seeing if they could find a home there. They saw the Armoury as it was, with its long run of high windows looking out over the river, and thought it would make an interesting pub, although it wasn't available at the time. To use an attractive building on the banks of the river for industrial production was a waste and the potential was plain to see for those with pub-eyes. It seemed that it could be a Harkers on a bigger scale, with the advantage that it would be big enough to cope with a healthy dining trade as well as a busy wet trade.

When the building did come on the market some time later, we were pretty quick out of the traps, although the building needed some serious work on it to get it up to scratch. What began as a quiet spot down by the river when we opened has since burgeoned into the entertainment quarter of the town, with bars and restaurants all around, which wasn't quite our original plan. 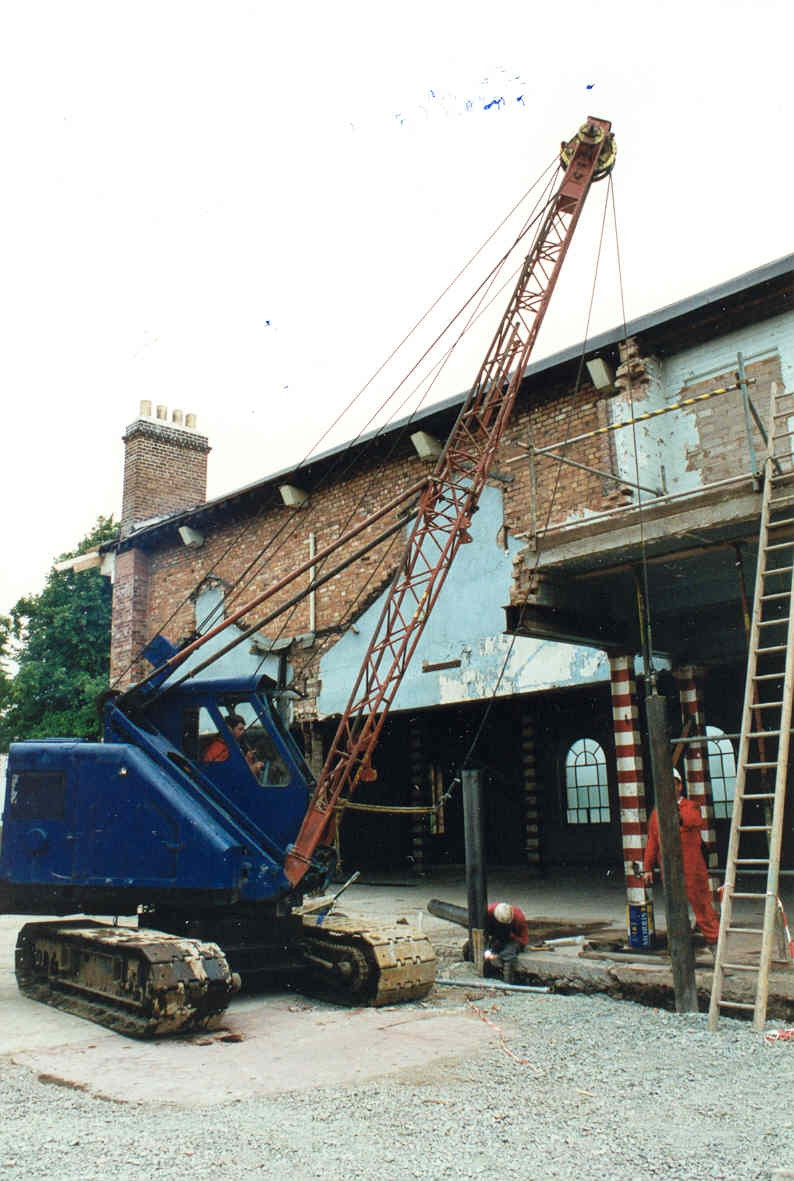 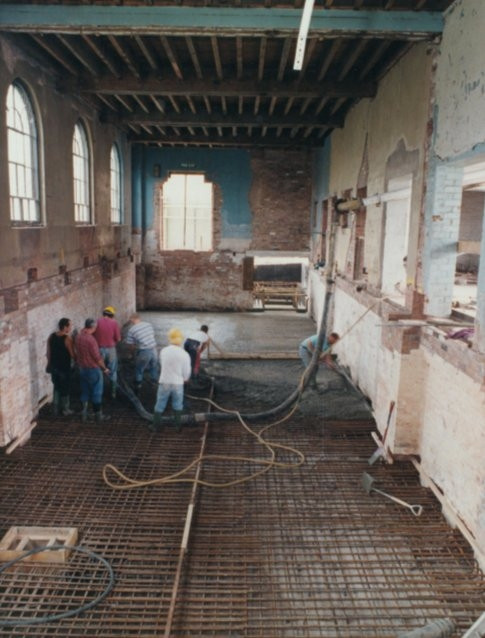 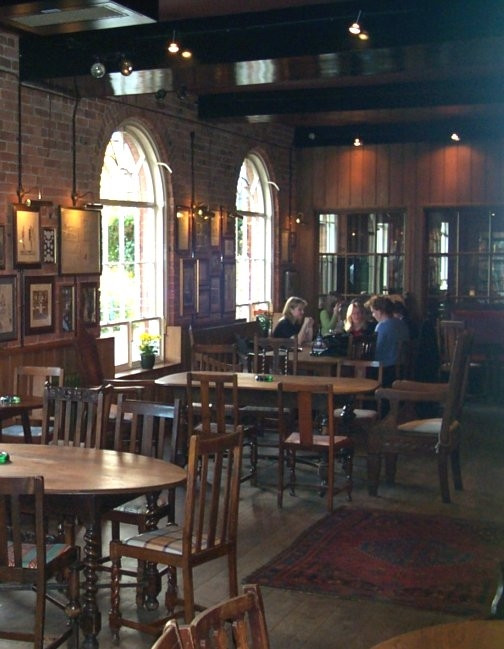 Photos courtesy of Morris and Co.

Tom is known as the old man of the Armoury who loves nothing more than to read a newspaper with his favourite beer. He joined the team 7 years ago and has been moving his way up the ranks, to become the Manager in march 2022. When not serving pints, he enjoys playing rugby for his team in Whitchurch or playing golf with his mates.

Emily's family have had pubs in and around Birmingham and Shropshire for years, so she's no stranger to a barrel of beer. She studied Drama and English lit at De Monfort University in Leicester, and is a ballroom and latin dance expert to boot. She has a passion for fine wine and vodka (not necessarily mixed), has a filthy laugh, and works like a Trojan.

Tom is our resident beer buff. He has been with the Armoury team for over 4 years now and enjoys nothing more than a pint of real ale or three. A cheeky chap with a warming grin who is always up for a chat over the bar.

Issie has been with us over 2 years now and is looking to work her way through the ranks at the Armoury. She is always smiling and is a firm favourite with the regulars. Outside of work she loves being active, sometimes running fitness classes at her local gym and supporting her triathlete boyfriend Dan.

Lissy joined us just over a year ago after finishing college, she is heading off to Manchester in September to study sports business management. Lissy loves going out with her mates and her favourite drinks are vodka orange and a Guinness after going to Dublin this year. Outside of work she is very sporty and loves playing tennis, football and running.

Hannah loves dogs more than people, literally. Hannah is loved by all in the pub, staff and customers alike. A true all rounder you'll see her behind the bar and on the floor.

Dave, aka Popeye, has been in the cheffing trade for many years including a spell working in the tavernas of the Greek islands where he perfected kebabs and moussaka. Dave follows a conflicting range of interests which include weight training, flower arranging, and tough guy competitions, running marathons and needlework. He also a big rugby fan and player when he gets the chance, and likes to wind down after a game with a Campari and soda whilst listening to his favourite Ronan Keating and Westlife tunes.

Sim has worked in the Armoury kitchen for nearly 10 years (on and off, he just keeps coming back!). Always smiling and a joy to work along side, his sense of humour is second to none!

Matt is now one of the longest serving members of the Armoury kitchen having started with us in 2017 and working his way up to a Chef De Partie. You may have noticed his stage name 'M Breezy', Matt is a huge music fan and a budding rap artist himself, just search M Breezy on Youtube and have look for yourself!

Noel is an Armoury kitchen legend, but now plies his trade front of house - he works hard and plays hard, as long as your definition of 'playing hard' is a cup of tea while watching 24 hours in police custody box sets. He is now the Armoury handy man and helps out in the morning cleaning as well.

Connie started at the Armoury in April 1999 and since then she has become an integral part of the maintenance and kitchen crew. She has a passion for anything from Laura Ashley and regularly brings chocolate biscuits to work with her in the mornings - so is a very popular member of staff.

If you're bringing a dog, please call us or send us an email so we can make sure we arrange an appropriate table for you. 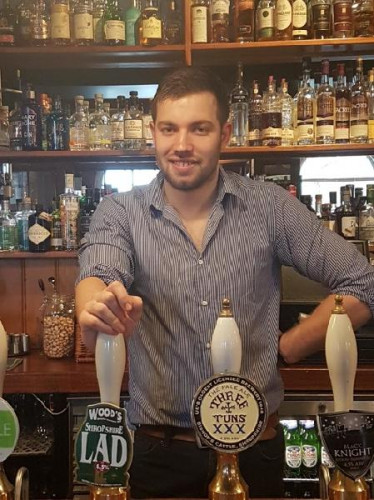