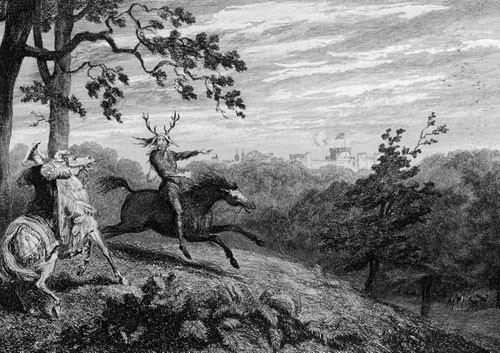 King Richard's White Hart had golden antlers and a golden crown around its neck with a gold chain hanging from the crown. Heraldically, the Hart symbolises peace and harmony, the White denoting purity.

In 1389 Richard passed an Act making it compulsory for pubs and inns to have a sign outside in order to identify them to the official Ale Taster, "otherwise he shall forfeit his ale." Consequently, a great many pubs were named 'The White Hart', after Richard II's own heraldic emblem.

The history of Chobham stretches back to before Domesday, being first recorded in the 7th century, during Saxon times, although various archaeological finds show evidence of human occupation stretching back millennia.

The heathland around the village may date from the late bronze age (2400-1500BC) when it is thought the woods were cleared, which would make it approximately 4000 years old. Some New Stone Age (circa 2500 BC) tools have been found, and Bronze Age (circa 1500 BC) type burial mounds (round barrows) are widespread - notably near Sunningdale, Longcross and West End. 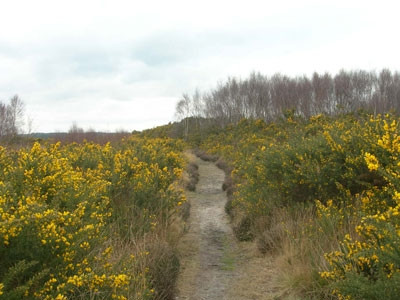 Roman habitation has been found at Bagshot. An urn full of Roman coins was unearthed in a Chobham field and a Roman coin was found in the eastern part of the Common. 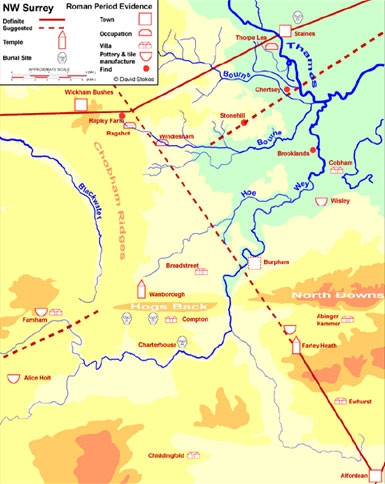 During the fifth century AD, following the withdrawal of the Romans from Britain, invading north-German Saxon tribes of warrior-farmers rowed their longboats up the Thames and established settlements in Surrey. It is believed that one of their chieftains was called Ceabba and thus the settlement he established here became known as Ceabba's Ham (ham meaning settlement). The place name evolved through the centuries to Chobham.

We can presume that Chobham would have followed the pattern of most Saxon villages of that time. It was built on a ridge of dry ground between two rivers (the Bournes). The fertile alluvial soils would have been ploughed to produce wheat, barley, rye, oats and beans.

The reconversion of England to Roman Christianity by missionaries in the 7th century soon led to the founding in 666 AD of a settlement of missionary priests at Chertsey. It was only some half dozen years later, when most of north-west Surrey (a name which means the 'southern area'), including Chobham, was given to this minster. This arrangement persisted for some 900 years until the dissolution of the monasteries by Henry VIII in 1537. 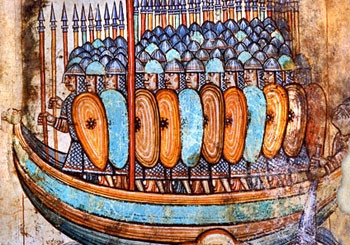 We do not know whether Chobham was seriously threatened by the waves of Danish raiders that troubled much of Britain, but we do know that in about 871 nearby Chertsey was attacked and fired.

As time went by, tribalism was gradually replaced by feudalism and centralised government, especially following the imposition of Norman rule in the 11th century.

Chobham, being under Chertsey Abbey, was probably spared the worst excesses of the Norman barons and the King's demands. Nevertheless, the villeins were forced by the Abbot to perform many duties on the Abbot's holding and to pay many taxes. Even after the Dissolution and right up to the 19th century the villagers were still expected to pay a one-tenth tithe to the vicar.

Chobham has always been somewhat of a backwater; bypassed by every new trend. The turnpike road developments of the 17th and 18th centuries brought prosperity to Bagshot (A30) and Ripley (A3), but they missed Chobham. The canal developments went too far to the south. The railways brought massive growth to Woking and Sunningdale, but the planned railway line to Chobham was never built.

The Inns of Chobham 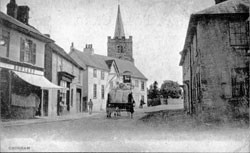 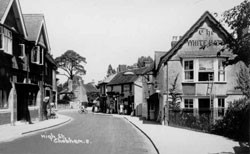 The property on the right of the photograph above is the White Hart, although it is not known when this photograph was taken.

Until the 1950s Chobham had four Inns in the High Street, an indication of its one-time affluence: The Old King's Head, The Horse and Groom, the Sun Inn and the White Hart. Of these four only the last two now remain; the White Hart is probably the oldest dating back to the time when Chobham was under forest law.

The White Hart is a timber-framed building that appears to have been constructed around a pair of shops that were built around c1500 at right angles to the street. The pub would also have had stabling for up to six horses, and at some point the timber framing was in-filled with brick facings. Also to the exterior of the building there can be seen evidence of windows being bricked up some 200 years ago to avoid paying window tax. The chimney from the sitting room had to be swept from the neighbouring churchyard using an aperture in the wall, which can still be seen.

The triangle of land that now forms the terrace of the White Hart was used as a pig auction in former times, and the view through to the village cricket green behind is still intact.

In March 1969, Chobham Common feratured as a location during the filming of a whacky comedy called 'The Magic Christian', starring Peter Sellers and Ringo Starr, the drummer in the Beatles. 'The Magic Christian', based on the novel by Terry Southern, is a film that most people either really love or hate. Appearing with Sellers and Starr in the film are Pythons John Cleese and Graham Chapman, Goon Show alumnus Spike Milligan, Christopher Lee, Racquel Welch, Roman Polanski, and Yul Brenner as a lounge-singing transvestite. Paul McCartney wrote the film's theme song 'Come And Get It' performed by Badfinger.

Stan has been working in the pub business for the best part of ten years, having worked behind the bar to support himself through university and during his time working in the music industry, before making the step up to join the management team at the White Hart. In the precious free time he does have, he'll usually be found glued to whatever football game he can find on tv, playing one of his many instruments or at the pub scouting out new beers to add to our lineup. It's research, honest.

Proud Frenchman Hervé joins us after an eclectic career that has spanned rugby, economics, hotels and more recently top-end pubs. He's full of joie de vivre and always up for a chat about the latest rugby news or anything else that takes his fancy, so feel free to pop in and practice your fran-glais over a G&T or glass of white wine (he recommends the Picpoul de Pinet).

Young Tom joined us having never worked in pubs before (most of his experience was the opposite side of the bar), but he took to the job with a natural flair and has established himself as a key member of The White Hart team. Tom has a questionable music taste (Drill music anyone?!) but he's developing a love of peated whisky to balance himself out on the sophistication scale, as well as working on converting to real ale from lager. It's going slowly, but we're sure he'll be president of CAMRA in no time... Watch this space!

Ant is part of the fabric of the building, having worked here in its various guises for over twenty years. If you're from the village the chances are you already know him, but for those who don't you're missing out! He's one of the kindest and most charming people you'll come across, and we're well aware how lucky we are to have him. Ant is the proud father to three kids, and enjoys spending his time riding his tractor (yes, really), going to the theatre or enjoying a glass of 'herbal tea' (preferably something dry and French).

With a friendly smile, a positive attitude and a sweet tooth, Ginny is perfectly at home at the White Hart. Ginny is the proud mother of three boys, making her a very busy lady, but in her spare time she loves baking up a storm in the kitchen, making cakes and puddings to rival even the professionals.

Jack started with us when he was just 18, but has quickly developed into one of our most seasoned and unflappable members of the team. He has an eclectic taste in music, everything from doom-metal to left-field Japanese pop, and is currently the pub's Smash Bros tournament champion (not for long!). Jack's got plans to travel the world in the next few years, so if you have any tips please feel free to pass them on!

After 10 years of bartending Viorel decided to step into the kitchen and in the last 6 years, has moved up steadily through the ranks KP to Sous Chef. Still keen to learn, there is not a day go by that he isn't his skills, which is to the benefit of us all. Cooking is Viorel's passion, but when he's not in his whites, he'll be spending time with friends, visiting family, playing chess, or partaking in a summer fishing trip or two.

Peter has been with us for many years. He is an extremely hard worker and a perfectionist when it comes to his dishes. An adrenalin junky, he often boasts having survived five extreme rides at Thorpe Park. Big man.

Adrian is the definition of a gentle giant, warm-hearted and considerate whilst towering above the rest of the kitchen staff. Originally from Scunthorpe, he has the distinction of being our longest serving member of staff, having been with us since the very beginning. Adrian is an avid Man City fan, and loves letting us know when they're doing well. Being a tough-skinned northerner, he insists on walking home after every shift, even in the harshest of weather. A customer even offered to give him a bicycle once, but to him that would be cheating. 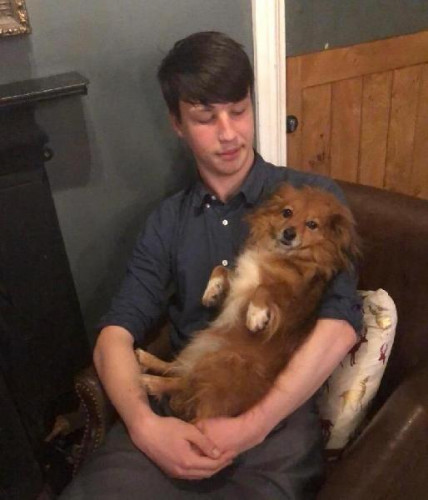