Here is little potted history of our pub and the local area... if you have a spare minute or two and maybe a cup of tea (or is that a G&T), we think it's well worth read.

Chigwell Village is approximately 11 miles North East of London, and has been described as 'the first village out of London'. 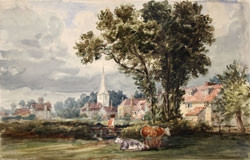 According to P. H. Reaney's 'Place-Names of Essex', the most authoritative guide to etymology in the county, the name means 'Cicca's well', Cicca being an Anglo-Saxon personal name. Folk etymology derives the name from a lost 'king's well', supposed to have been to the south-east of the village centre near the border of what is now the London Borough of Redbridge. There were several medicinal springs in Chigwell Row, but none have survived to the present day.

Chigwell is mentioned in the Domesday Book. The combined Domesday figures for Chigwell Hall and Woolston give a total of 23 villeins, 4 bordars, and 8 freemen in 1066, to which a further 4 bordars had been added by 1086. In 1391 there were 72 houses in the parish: there was a small concentration round the church in Chigwell Street, but most of the houses were scattered throughout the parish. 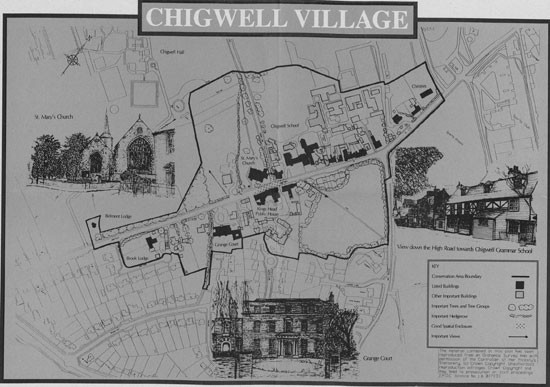 Among the oldest surviving houses in the parish are the Retreat at Chigwell Row, Woolston Hall, Marchings, and Brownings, all of which date from the 16th or early 17th centuries. Woolston Hall was particularly splendid, with a grand drawing room. 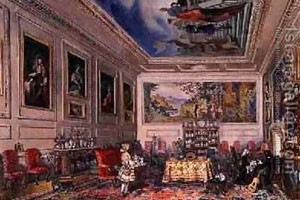 The most important road in the parish in early times was the London-Abridge road, which was also the main road (via Theydon Bois) to Epping. This follows closely the line of an old Roman road, passing near the site of a Romano-British settlement near Woolston.

Before the 17th century the repair of the parish roads was largely a matter of charity, and many bequests were made for this purpose, for example, those of Cicely Rypton (1551) and George Scott (1588). In 1592 the surveyors of Chigwell prosecuted eight parishioners at Quarter Sessions for refusing to do their statute duty on the roads. In 1682 the Woolston manor court prosecuted the surveyors themselves for failing to repair a footbridge, and threatened them with a penalty of £5 if they failed in the future. 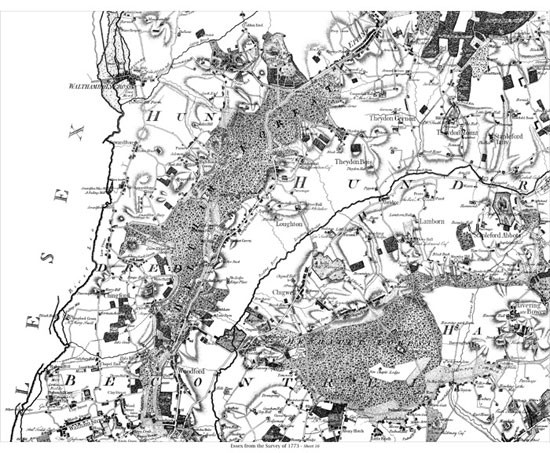 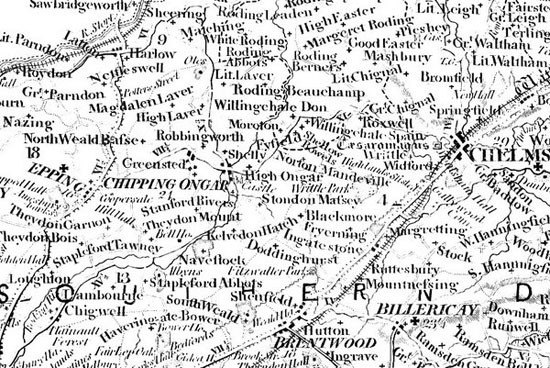 After his death in 1848 his widow kept two coaches for some years, one ran to London daily and the other to the newly opened railway station at Ilford. In 1858 these coaches were taken over by William Claydon who in 1864 moved to Vicarage Lane. For many years before the building of the Ilford loop, a coach ran every morning and evening to Woodford station, the Ilford coach being discontinued. Coaches owned by Nelson of the 'Bull', Aldgate, ran to Chigwell Row until 1868. In 1848 Henry Chipperfield ran a wagon three times a week from Chigwell to London and John Wilton ran one daily from Chigwell Row. Here is a photograph of a coach outside an inn in Ongar, in 1880. In 1878 William Claydon
ran a wagon to London four
times a week.

Chigwell was originally situated in the heart of the forest of Essex.

At one time the forest had been vast, but in 1301 it was greatly reduced and broken up into several smaller royal forests by Edward I. Chigwell Row Wood is now part of the Forest of Waltham, which contains both the forests of Hainault and Epping. By the 1640s this impressive forest still covered some 60,000 acres. During the plague years the forest was used as a retreat - people tried to escape by living in the woods, away from the centres of population. This is the way things remained for centuries as colliers and woodsman maintained the management of the wood pasture and what must have been a staggering number of pollards.

However, at the turn of the 1800's, trouble was on the horizon for Hainault, as illegal enclosures had forest officials taking people to court. This was eventually to lead to an Act of Parliament being passed in 1851 that saw the wholesale enclosure and destruction of the Forest. 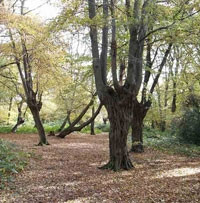 Specially invented machines cleared the timber and in just 6 weeks around 3,000 acres of the Forest were gone forever to create farmland. Over the next 50 years further parts of the Forest went to the same way until by 1900 Chigwell Row Wood was the only significant part of the Forest left to the west of the Romford Road. The fact the wood survived at all probably comes down to the fact that in 1896 it was felt the inhabitants of Chigwell should have somewhere to walk and exercise, so on the 19th September 1886 an enclosure award established the Manor Hill Recreation Ground as a charity. Here is a photograph of the official opening of Hainault Forest on 21st July 1906:

Two small patches of woodland still exist within the area of the ancient parish: Lords Bushes at Buckhurst Hill cover 90 acres belonging to Epping Forest, while at Chigwell Row there are some 50 acres.

Chigwell was described by Charles Dickens in 'Barnaby Rudge' as "the greatest place in the world...Such a delicious old inn opposite the church...such beautiful forest scenery...such an out of the way rural place!", Dickens used to frequently visit the area, staying in local pubs. In the novel, he named the pub in Chigwell The Maypole, although the building he actually described was the Kings Head, decribed as having "more gable ends than a lazy man would care to count on a sunny day". Here is the Kings Head in a photograph from 1900, and as a very Dickensian biscuit lid Christmas scene: 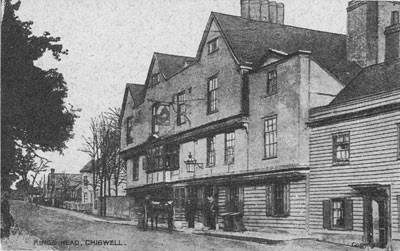 Thomas Day (1748-89), the eccentric author of Sandford and Merton, bought a house at Abridge in 1779, shortly after his marriage, and lived there for two years. He studied architecture and astonished the builder by having a wall made first and the windows knocked out afterwards - a unique method of construction that never quite caught on. Chigwell School, a public school, was founded from a bequest by Samuel Harsnett, Archbishop of York, in 1629. Among its many famous past pupils is William Penn, who later went on to found Pennsylvania. The diarist John Aubrey recorded that it was at Chigwell School that Penn had a mystical vision, which influenced his later conversion to The original 17th-century schoolroom where Penn was taught still stands, and is now the school library. Here is a photograph of the school (then known as Archbishop Harnetts School) in 1904: Here is a portrait of William Penn, and a reproduction of a tract he wrote, published in 1682, saying farewell to the land of his birth. It is not known where the name 'The Two Brewers' came from. There had been a brewery in Abridge in 1729, when its owner is said to have been the owner of White Hall. Abraham Oliver, brewer of Lambourne, occurs in 1808. During the later 19th century the brewery became the Abridge Brewery Co. which was later acquired by Whitbread & Co.

The photograph below shows the Two Brewers in 1955 when it was still a Whitbread house. Louise can be found all around the Two Brewers during her shifts. Mainly Front of House based, Louise strives for excellence and will always try to go the extra mile for our guests. She is a proud mum of 4 children aged 26, 25, 19 and 4 and has 5 grandchildren (gulp!) Outside of work, Louise is an avid concert & festival go-er!! Busy girl!

The lovely Lynda has been with us for some time, working part time behind the bar. In her spare time she likes to pole dance...

Front of house
Back to top