To begin at the beginning, Castlefield was the site of the Roman era fort of Mamucium, established in AD 79, which guarded the Roman road that ran from Deva Victrix (Chester) to Eboracum (York). Interestingly, Mamucium means 'a hill shaped like a breast', which presumably made it easy to defend.

The fort would have been garrisoned by a cohort of about 500 troops. Originally constructed in turf and timber, it was expanded and re-inforced with stone around 200 AD, when about 1,000 men would have been stationed here. It was occupied by the Romans until AD 410 when the Romans finally left Britain to defend Rome against the Barbarians. 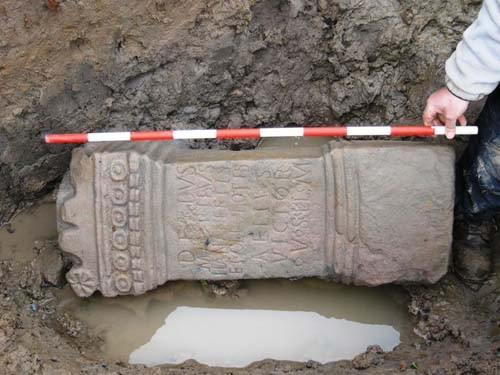 Little visible evidence survives of the Roman fort, but after extensive archaeological investigation by the Greater Manchester archaeological unit, part of the fort and the North Gate were re-constructed in 1987 together with several other noteworthy features. 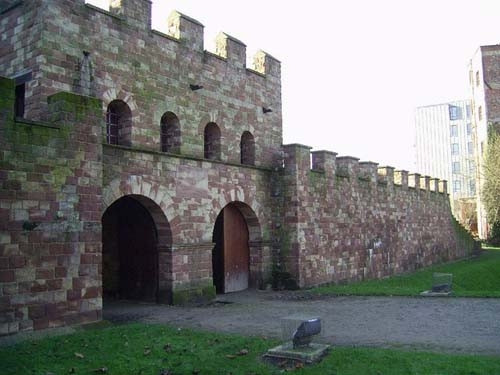 The reconstructed north
gate to the fort

Castlefield and the beginning of the industrial revolution

Castlefield is a conservation area as a result of its rich industrial history: it was the terminus of the Bridgewater Canal, the world's first industrial canal built in 1764, with the oldest canal warehouse being built here in 1779. 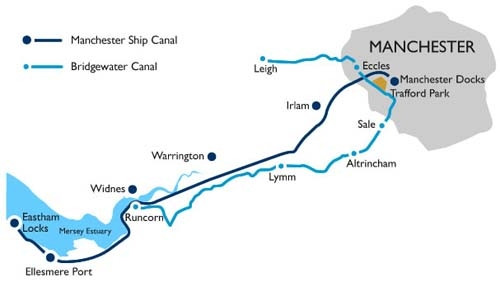 A map of Bridgewater's canal
(with thanks to www.canalarchive.org.uk)

Some believe the building of the Bridgewater Canal marked the beginning of the industrial revolution. It was constructed to bring the Duke of Bridgewater's coal from his mine at Worsley, enabling large quantities of coal to be transported to fuel the burgeoning industries of Manchester, and enabling goods to be transported efficiently to rapidly expanding towns and cities of the north. 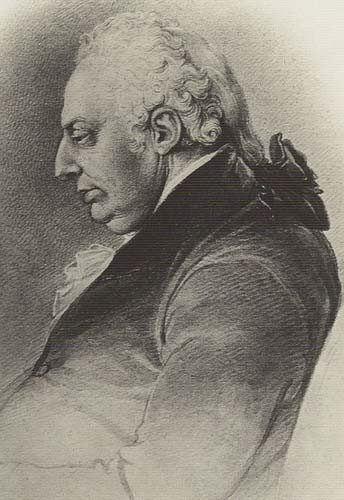 The Duke of Bridgewater

The project nearly bankrupted the Duke, and he had to borrow to pay his workmen. In 1765 he obtained a loan of £25,000 from Child's bank, but this was only the beginning by today's values he was eventually some £2 million or more in personal debt, but the eventual huge success of the venture ensured his fortunes were restored in the later years of his life: his annual income was said to exceed £80,000 a year in the money of the day, and he became the richest noble in England. 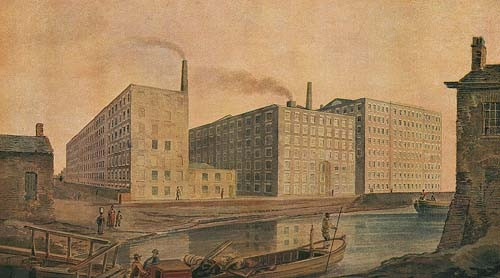 Manchester's cotton mills in 1820,
the height of the industrial revolution

Castlefield was designated as a Conservation Area in 1980 and the United Kingdom's first designated Urban Heritage Park in 1982 as part of the drive to regenerate the area.

The Wharf is actually a modern building, built in 1998, but a map of the site from 1889 apparently shows two travelling cranes running on 25 foot high gantries. The wharf was open to the skies to enable the stacking of goods beside the canal.

In the aerial photograph below, which comes from Manchester history website "Our Manchester" (http://manchesterhistory.net/manchester/tours/tour1/area1page63.html) the site of the Wharf has been marked with a red dot. The photograph was taken in 1953, and on the site at that time were two large Nissan-hut like commercial buildings. 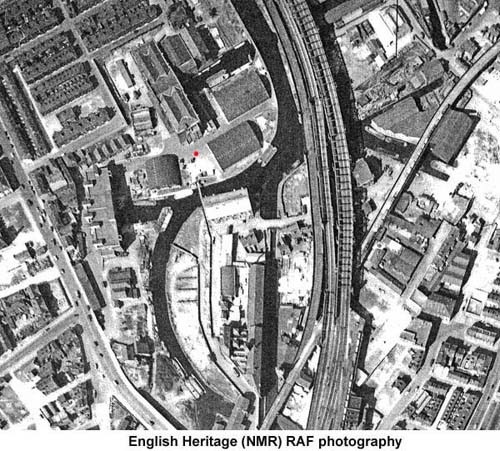 An aerial view of the site
of the Wharf in 1952

The buildings were still there when this photograph was taken in 1972: 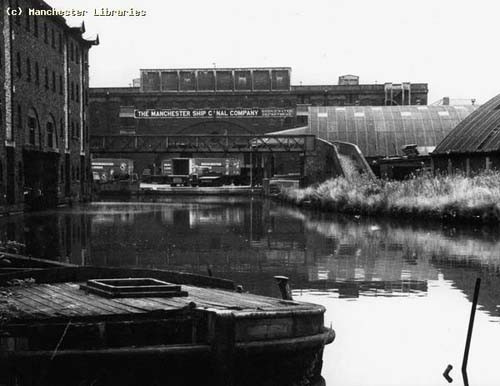 The site of the Wharf in 1972 (with
thanks to http://images.manchester.gov.uk)

The building is actually a purpose-built pub which opened in 1998, when it was named Jackson's Wharf, but reviews were generally not favourable and it ceased trading in 2005. Peel Holdings, the developers of the Trafford Centre and Media City, acquired the site and attempted to develop a huge apartment block complex on the site. The original planning application was submitted in 2006.

An extract from the
Pride of Manchester's on-line
thanks to www.prideofmanchester.com)

The first proposal, from the Ian Simpson practice, was for an eight-storey rectangular block, but it attracted a great deal of negative feedback because of the excessive size of the building, its incongruous appearance and the negative affect it would have on the area's application for World Heritage Site recognition. Protests were organised, and the Pride of Manchester group helped to co-ordinate opposition to the plans, enlisting the support of Mike Harding, Jason Orange of Take That, and Olympic swimmer James Hickman amongst others. 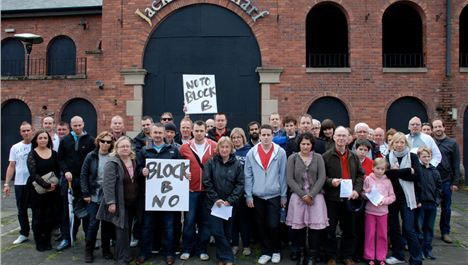 Local residents protesting about
the planning proposals (with thanks
to www.manchesterconfidential.co.uk)

Peel Holding's proposals were rejected again in 2008 by the Council's Planning Committee.

Simpson and Peel Holdings came back with a further design that involved a similar building in the form of two separate rectangular blocks. It too was rejected by the Planning Committee. Peel Holdings decided to take legal action to push the controversial plans through, which resulted in a Government appointed public enquiry.

Peel subsequently put forward a fourth proposal which also received little support, and in June 2011, after five years, Peel finally dropped their planning proposal. This was hailed by local residents and media as victory for the common man in their David and Goliath struggle with big business.

Campaigner Ian Christie, of the Castlefield Forum, said: "This is marvellous news a victory for Castlefield, common sense, conservation and everyone who wants more parks and green open space in the city." City center spokesman, Coun Pat Karney, added: "In this historic and much-loved area of Manchester, this is a victory for local residents and councillors and a victory for Manchester."

Having made an earlier approach with an offer to Peel Holdings, we recommenced negotiations to buy the building, and the transaction was completed on December 1st 2011.

Tash has worked at The wharf since 2014. Her enthusiasm, drive and passion make's working a shift with her a dream. Tash had a short stint in our sister pub the Glasfryn for 6 months but luckily for us missed the hustle and bustle of city living so soon joined us back at The Wharf. If Tash isn't running around making a shift fun for staff and customers alike you can find her dressed to the nines with a G+T in hand or joining the lads cheering on her beloved Man United (we can just about forgive this lapse in judgement).

Jess is a Manc girl who studied Biology at Manchester Met Uni, however to our delight soon realised she preferred the hustle and bustle of pub life. When not running around the pub youâ€™ll find her running a charity marathon, practicing yoga and swimming. On the rare occasion Jess does sit down she will be reading an epic novel while relaxing with her 2 cats Optimus and Mulan. Jess is a dedicated veggie and likes to eat healthily, however she is partial to the odd glass of vino.

Callum is a local lad who was born in Withington and raised in Knutsford. He has lived in Manchester for 5 years preferring the hustle and bustle to the countryside. After he left school, he first became a hairdresser, before going on to be a banker meaning he already has 12 years of customer service experience under his belt. We are made up the lure of the pub has drawn him to become part of our team, always giving first class service with a big smile. Callum loves cats and enjoys cosying up to his two - marmalade and toast! When not at work you will find Callum in the gym or dancing the night away with a Gin and Tonic in hand.

Kat is originally from Cumbria but decided to move to her favourite city in the north. Katâ€™s passion for hospitality comes from a love of food, good beer and traditional pubs. If Kat's not at The Wharf, you'll find her at home spending time with family and friends or enjoying a hard earned pint! One thing that sums Kat up as a person is how her favourite season of the year is spring as that's when everything comes back to life.

Simone is a canny lass, originally from the north east but then came to Manchester to study psychology. She found herself fitting right in at the Wharf so ended up staying and progressing to supervisor! Her attention to detail is spectacular, and when she isnâ€™t here, you will probably find her out at a gig or on a long walk in the lake district.

Jordan, originally from High Wycombe, decided to move to Manchester after falling for the camaraderie and atmosphere of the city. Heâ€™s a laid back guy who always has a smile on his face, especially when heâ€™s enjoying a pint with his friends and sharing dreams of travelling to see the world. When heâ€™s not relaxing, you can find him front and centre ready to greet you at The Wharf. His naturally funny and caring character makes him a pleasure to have on the team.

Scott, our kind southern soul, is our newest, thriving supervisor. Originaly from kent, he spent some years working in spain and ireland, and has brought back some wonderful ideas and added his own unique style to our team. If you dont catch him here, you'll be sure to find him on a mini golf course having a laugh, or drinking guiness in an irish pub as it stays close to his heart.

After spending four and half years behind the pans at the Sydney Opera House, Tom returned to the UK to catch up with his friends and family. After taking a job at the Aspinall Arms to save for a trip to Europe Tom fell in love with pub life and decided to stay on home soil and join the opening team at Haighton Manor. Tom has buckets of creative talent and infectious energy which makes him a joy to have around, particularly when the going gets tough.

A great hand in our huge gardens, Sue loves to spend her time cycling to keep fit and weight training for all that heavy lifting.

For tables over 20 people

For tables of 21 or more, please email [email protected] with as much detail as possible and we will be in touch to confirm your booking. Please include: your name; date and time; whether its for eating or just drinks; what the occasion is; whether you'd like inside or outside and finally your telephone number so we can get back to you. 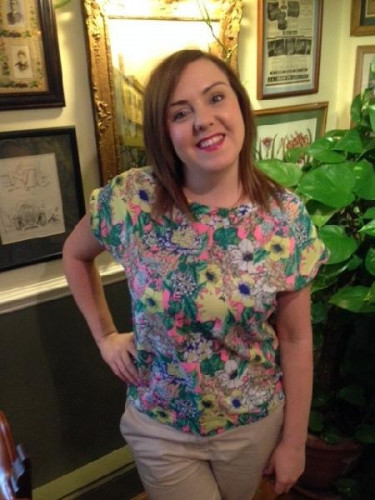 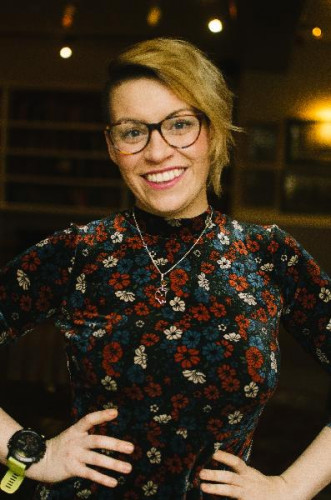 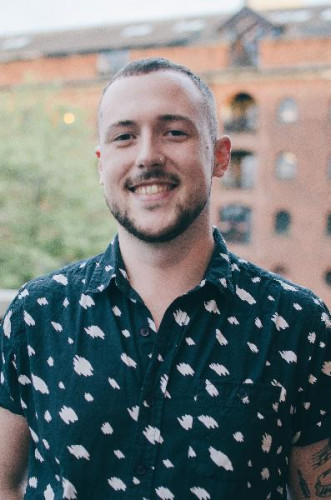 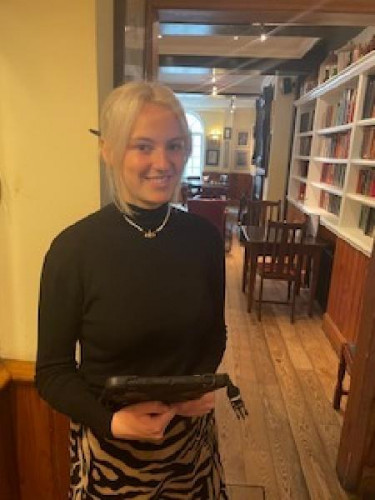 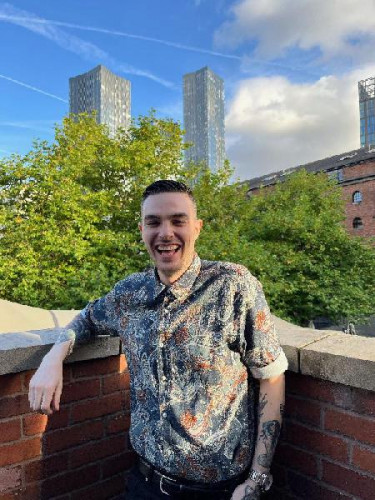 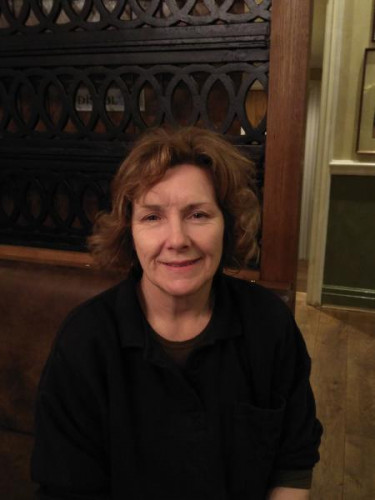