In the grounds of Sutton Hall there is a somewhat dilapidated Bronze Age barrow (now the resting-place of a water trough). 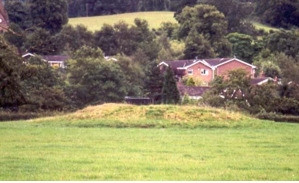 In 1962 the barrow was again excavated, by James Forde-Johnston of Manchester University, who unearthed evidence of several further cremations. He discovered that the mound had originally been around 100 yards in diameter, but was substantially reduced, with many of the river cobbles having been removed to the nearby farmyard for use in paving, where they can still be seen.

A couple of millennia later

In the 12th century, the Norman earls granted the manor of Sutton to individual families, for the performance of certain duties within the Forest of Macclesfield. Sutton was originally two manors, Sutton and Downes, both of which gave names to separate families. In the second half of the twelfth century, Hugh Keveloic granted the land to Adam, son of Onyt, whose family assumed the name of Sutton. The Suttons may have acquired the remainder of the manor in the 16th century.

This license was not acted upon, but in 1410 Henry IV granted a confirmation licence to crenellate Sutton manor, for which the abbot of Chester paid 13s. 4d. (67 pence in today's money).

This building no longer survives. The current hall, built on the foundations of the previous structure, dates from sometime in the 16th century, with numerous later additions. We'll keep our eyes open when we tackle any structural work to see if we can find any evidence of the earlier Medieval manor house.

Sutton Hall was the birth place of Ralph Holinshed, a 16th century scholar whose historical chronicles were used as the basis for fourteen of Shakespeare's plays. As a young man he worked for Reginald Wolfe, who in 1548 planned to prepare a history of the world. Wolfe died in 1573 with the book incomplete and his heirs gave Holinshed the task of completing a less ambitious work covering the United Kingdom alone. These were published in 1577 as The Chronicles of England, Scotland, and Ireland. Holinshed is very well known amongst Shakespeare scholars, but Shakespeare played fast and loose with many of Holinshed's texts.

Moving on a few hundred years or so, Sutton Hall became part of the family estate of the Earls of Lucan. Here is a letter from the 3rd Earl of Lucan, George Charles Bingham (1800-1888) to William Brocklehurst, his estate manager at Sutton Hall. The letter was written in 1842, urging Brocklehurst to implement a scheme for the management of his Sutton estate and asking for help in securing two mares ("I have always admired the horses about Manchester & Liverpool") 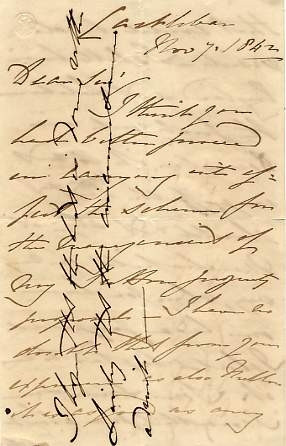 George Charles Bingham was a field marshal at the battle of Balaclava during the Crimean War, which was the campaign that featured the infamous charge of the light brigade, when cavalry heroically, but tragically, charged the guns of the Russian army.

In a nutshell, the disastrous action came about through a commander failing to take account of the fact that he was on a hill and could see what was going on, though his troops in the valley could not.

The situation was apparently exacerbated by upper-class rivalry. George Charles Bingham, the Earl of Lucan, in overall command of the cavalry and subsequently promoted to Field Marshal, was by all accounts an imperious and over-bearing aristocrat who was promoted to high position over more proficient professional officers because of his social connections. He let a personal quarrel with his brother-in-law - Lord Cardigan, commander of the Light Brigade - reach such a point that their respective staffs refused to co-operate, and an order from Lucan to Cardigan was misconstrued, leading to the charge.

Balaclava was also, of course, the spawning ground of the eponymous woollen helmet, knitted by the womenfolk of the British Isles to protect their men from the ravages of the Crimean climate. The Oyford Encyclopedia (Oyford, that is, not Oxford) is quite illuminating on the subject. The entry reads - "Balaclava Helmet - A tight-fitting woollen helmet-like covering for the head and neck, originally worn by soldiers on active service in the Crimea. When the Balaclava Helmet was first introduced there were heavy casualties and it was very much disliked, but then someone had the idea of cutting a hole in the front of it so the wearer could see where he was going".

Moving on another century or so, George Charles Patrick Bingham, the 7th Earl of Lucan, also earned a measure of notoriety, having disappeared on 7th November 1974 after the murder of his nanny at his house on Lower Belgrave Street, London. All the evidence points to Lucan as the murderer.

The belief is that he was actually intending to murder his wife, but his children's nanny was in the wrong place at the wrong time. He fled the scene and has never been found, although numerous sightings have been reported from around the world. For the full story go to http://www.lordlucan.com. The author of this piece is of the firm belief that Lord Lucan is alive and well, living in South America or Africa, possibly Canada or the USA (which narrows it down a bit).

Lord Lucan in the '70s and perhaps now in Goa

If you see this character hanging around the bar looking furtive, the police would be grateful if you would ring them.

This is an early draft of the Sutton Hall history page, and if you have any interesting bits and pieces, be they anecdotes, old menus, old photographs or whatever, we'd love to see them.

Born into a family of hoteliers, Ian has done just about every job in the industry before finally landing with Brunning & Price. Previously he has been at the helm of two of our other pubs, the Mill House and Worsley Old Hall, before taking the reins here at Sutton Hall. His proudest achievements are winning CAMRA turnaround pub of the year...twice!

Tom joined us back when he was studying Event Management down south and has since become a full time member of the team, commonly referred to as 'The Garden Gnome' for living in the village, Tom has a love for all things pub, pints and houseplants along with the occasional Gin & Tonic. He can often be found planning our next event or exploring new flavours of Gin we can add to our ever growing collection!

Leanne joined the team as one of our Assistant Managers back in 2020, and she took to her new role with bottles of enthusiasm! A firm lover of wine in particular White Zinfandel, Leanne has a passion and love of event management within hospitality which we just love!

Siobhain studied fashion and textiles so she's brought her innovative eye for detail with her to Sutton Hall. Siobhain enjoys wild swimming and outdoor adventures, her favourite drink is "anything wet" and her motto is: seeing is believing, creativeness is a way of life.

Laura has been with Sutton Hall since 2016. Often found running the pass or rowing on her rowing machine, and now with a new addition to her family, Laura has discovered a new love of dog walking! If you have got a dog walk in mind around the local area, Laura & Bailey will probably know every stick, pebble and puddle!

Dee Dee is a ray of sunshine since she joined our team in 2021. A friendly face in the restaurant and when she's not here, Dee Dee is on days out and walks with her three children. She loves going to the gym and her favourite tipple is white zinfandel with a dash of lemonade!

Naomi previously worked as a stewardess on a private yacht as well as a wedding coordinator. She handles all of our bookings and events so rest assured they are organised to the highest standard. When not at work, you can find Naomi walking with her dogs or dancing the night away with a prosecco in hand!

There were many superb original features of Sutton Hall that we greatly admired and wanted to keep, Barbara being one of them. She kept an eye on the building while we were deciding which way to go with it, and has proved an invaluable help, particularly with her endless fount of local knowledge.

Steve is our dedicated Handyman & Gardener, looking after an old pub like ours takes a lot of work and Steve could probably tell you about every tree, plant, rock and creaky floorboard! When he isnâ€™t doing jobs, or having a brew, Steve loves to sit down to a pint of at the bar! 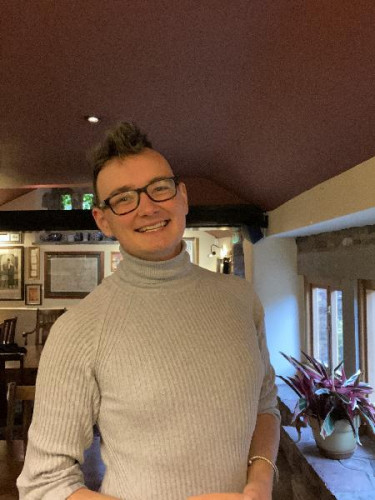 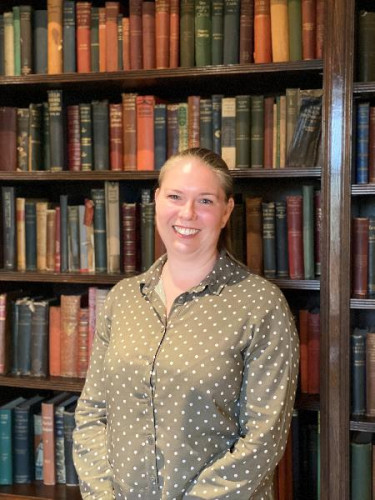 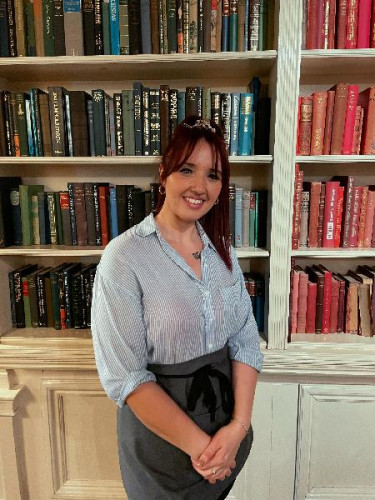 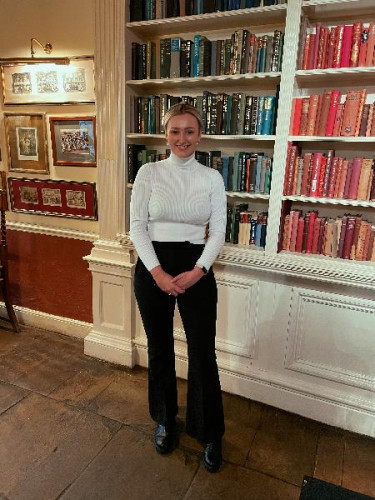 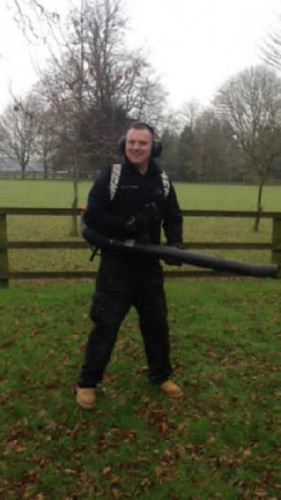