Like many English pubs, the Pheasant in Buckland has seen several name changes over the many hundreds of years it's been looking after locals and travellers. The Pheasant was first named 'The Tap' in the late 18th century, then became The Jolly Farmers, and is now re-born as the Pheasant, in reference to a previous landowner, the Earl of Arundel, who in the 16th century complained about the general poaching of pheasants on his estate, which was greatly displeasing to him, but no doubt helped nourish the local community.

The earliest record of the deep past of the Pheasant comes from the date 1766, stamped into several of the bricks of the adjacent cottage. This building, now called Jolly Farmers Cottage, was in fact the site of the original tavern, The Tap, which is clearly marked in a map of 1801.

The Tap was situated opposite Tap Woods, but whether the wood was named after the pub, or the pub named after the woods, is a moot point, though we can find no reference to 'Tap Woods' prior to the arrival of the pub. 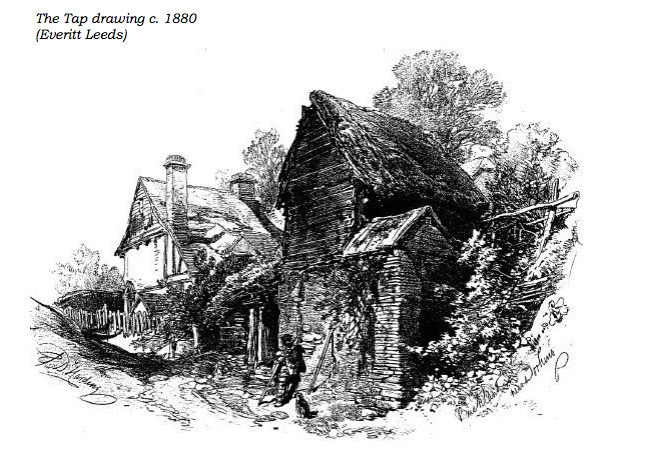 The Tap in 1880, looking pretty Grimsky-Korsakov. Not very jolly.

At that time, anyone could sell beer or cider from their home, generally in their front parlour. The beer was usually served in jugs or dispensed directly from tapped wooden barrels on a table in the corner of the room.

Often profits were so high the owners were able to buy the house next door to live in, turning every room in their former home into bars and lounges for customers - and this would perhaps account for the re-location of premises to the purpose-built property next door. 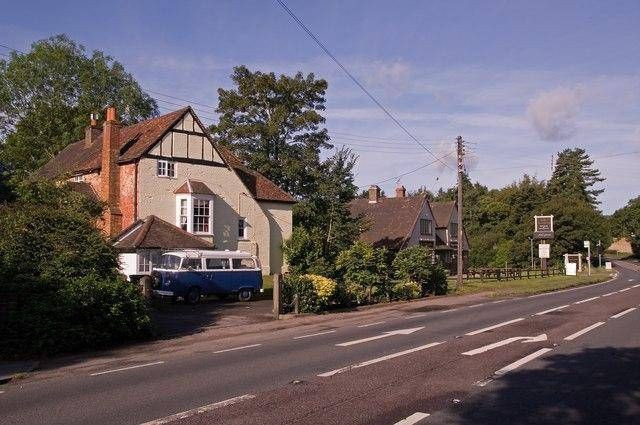 This photograph shows the original Tap tavern to the left, with the new premises next door

The front of The Tap was actually at right angles to the road, and Duncan Ferris, author of the excellent 'Buckland 1000 - 2000', tells us that at some time in the evolution of The Tap, a small 'summer house' at road level was added to the gable of the house at the same level as the inside cellars, most likely by way of attracting customers, much as we might today add a conservatory.

You can read a pdf of Duncan Ferris' publication here.

In a tithe survey of 1846, the pub is called "The Tap House", and was owned by Neale Thomas, with Mary Truelove as landlord. We believe the pub was re-named The Jolly Farmers in the early 20th century. Throughout its history, census records show that the pub was generally a family business, often handed down through succeeding generations. A photograph showing that the original Tap had been re-named The Jolly Farmers, before it moved next door...

In our fossicking through the historical laundry of the pub, we've came across a photograph of the Jolly Farmers from the early 20th century, where we couid just make out on the pub sign that it was owned by the Mellersh and Neale Brewery of Reigate.

Mellersh and Neale was a substantial and pretty expansionist operation with an estate that stretched right across the region, buying up and absorbing many existing smaller breweries, while along the way they brewed a bottled beer which they exported to the West Indies. Mellersh and Neale developed a large mineral water business way back in the 1930's, before it became cool, which turned over a substantial amount of money and was hived off as a separate business in its own right.

The brewery stored and matured their cask ales in caves below Reigate, which apparently gave the brewery a competitive edge as the ales were delivered in perfect condition. 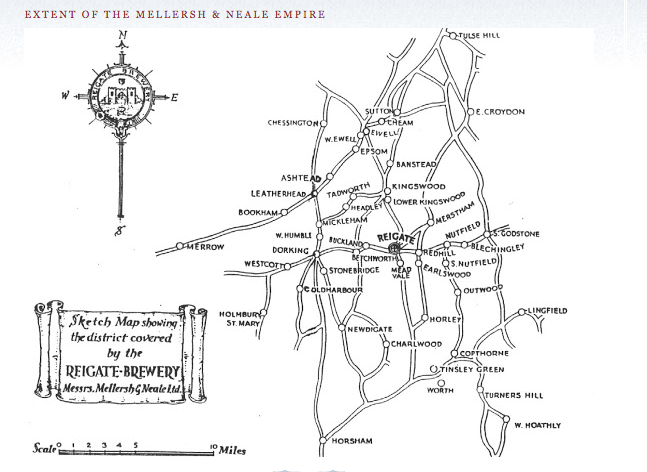 By the 1930's, the pub had moved into its current premises as The Jolly Farmers. Mrs Welfare, a local resident, recalls regular motor cycle and sidecar races in Tap Woods in the 1930s. 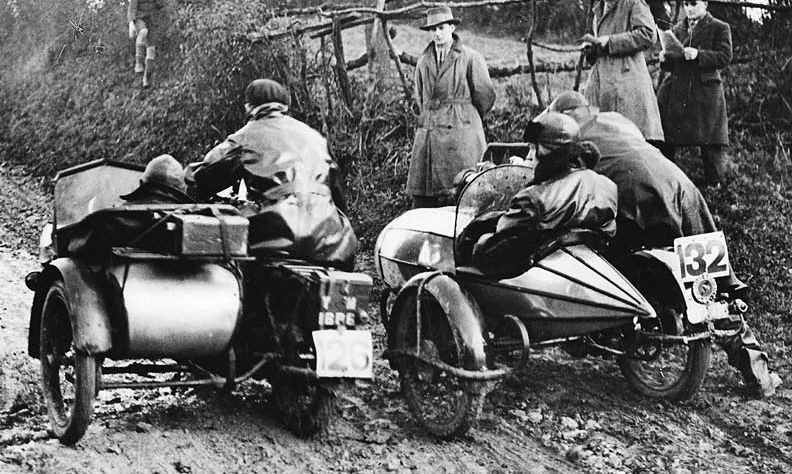 Mellersh and Neale were bought by Meux in 1938, and the family identity of the brewery and its pubs gradually dissipated. As you reap, so shall you sow. For a comprehensive history of Mellersh and Neale, please visit a highly researched and comprehensive website written by archaeologist Richard Symonds, to whom we are most indebted:

Buckland is also the location of the Shag Brook, running near to the pub, which local legend says was the home of a monstrous horse (in some versions a gorilla), called the Buckland Shag. This beast would drag travellers from the nearby coaching road and devour them on the Shag Stone, a large boulder in the brook with a blood red vein of iron ore running through it.

The local parson, Willoughby Bertie, had the Shag Stone removed from the brook in 1757 and thrown from a cliff in Devon. The Buckland Shag then disappeared from local folklore. 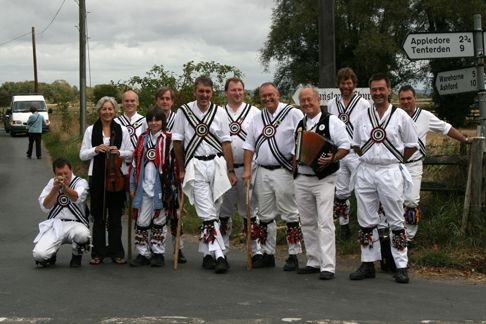 The Morris men's website tells us that at dawn on Mayday 1987, something appeared from the region of Buckland pond. Sightings were reported around Surrey every Friday evening through the summer, but only at selected licensed premises serving quality ales... 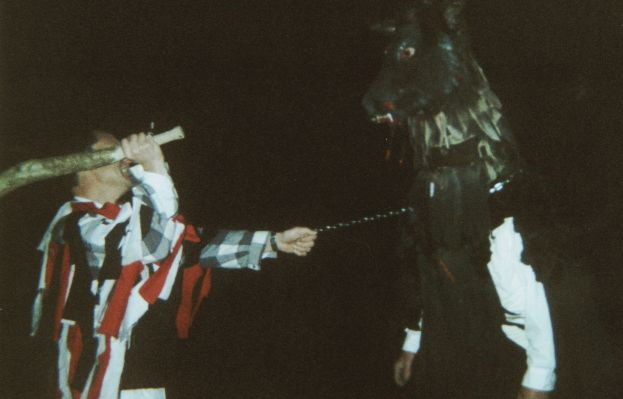 For the past two decades this pattern of sightings has continued, and we're keeping our eyes peeled...

Holly has been here for 3 years and became a Supervisor in the Summer of 2018. You'll often find Holly behind the bar recommending Gins and their various accompaniments. When Holly inst recommending Gins, shes out drinking them - she is defiantly the party animal of the Pub!

Lizzie is our glamorous Assistant and has been with the company nearly 10 years! (She started when she was clearly only 8 years old). Lizzie is a Gomshall local so when sheâ€™s not helping us run things day to day sheâ€™s on the other side of the bar with everyone in the village savouring a Grapefruit Gin and tonic. Eyes on the prize Lizzie has taken on the events planning for us and sheâ€™s already proven her worth with plenty coming up in the future. Sheâ€™s not always been with us here at the Gomshall Mill as Lizzie loves nothing more than jetting off to sunnier isles, having spent 3 months of last summer touring America and this summer sailing boats around Croatia. We canâ€™t wait to see what you do next Lizzie!

Tony is more popularly known as T-dog by our chefs and helps us through our busy Saturday night shifts! When he's not here at The Pheasant, he works for another catering company. Clearly enjoying working with people he always has a smile on his face and has a quiff as golden as the sun!

Our lovely Lisa joins us from the Jolly Farmers so knows exactly what needs to be done. Believe it or not - Lisa is a mum to five kids! We like to think she comes to us for a bit of peace and quiet - however quiet we are?! Always smiling and is a pleasure to work with.

Emma is our very own little pocket rocket! If Emma isn't at work you'll find her chasing around after her little boy, Hugo. If she isn't serving food, she'll be cooking it at home and enjoying it with a glass (or two) of champagne.

Alex is our breakfast maestro having joined us from the Jolly Farmers! She is our ray of sunshine in the early mornings - especially as she makes a mean full english! When Alex isn't cooking up a storm in our kitchen she is at home with her son and husband hopefully putting her feet up!

Emily is our ray of sunshine in the mornings and certainly an early bird! Em is in the pub from the crack of dawn clearing up after us every day (we don't know how she puts up with us!?) Em looks after the girls: Tania and Becky who help her clean too but she is truly the OCD one of the lot. We are lucky to have her. Em is the first one to attend the staff do's with a disaronno and a pint of becks. Usually found dancing round the pub at 6am to the radio...

Gary is the employee of the year! Gary joined us not too long ago to sort our gardens out, oh boy, has he done wonders. Gary was going to retire but then decided he loved gardening too much so came along to join us to work away. You will either find him singing away, tasting the leaves or taking before and after pictures - all whilst working the hardest you have ever seen. Gary has a big family which is still growing, a love of tattoos and perfectly enough - gin!