The Nevill Crest and Gun is a 500 year old listed building that was part of the estate of the Nevill family, who are the Earls of Abergavenny. The "Nevill Crest" of the title refers to the crest of the Nevills, which is a bull with a crown around its neck, which we have included on the pub sign as a crest on top of their coat of arms. You can see it at the head of this page. On the walls of the pub itself can be seen the monogram A, which stands for Abergavenny. By extraordinary co-incidence, the bulls head crest is also associated with another of our pubs, the Old Hall Sandbach, as it was the crest of the Lords of the Manor of Sandbach, the Radcliffe family. The Radcliffe family and the Nevill family intermarried in the 15th century, and adopted the same crest. 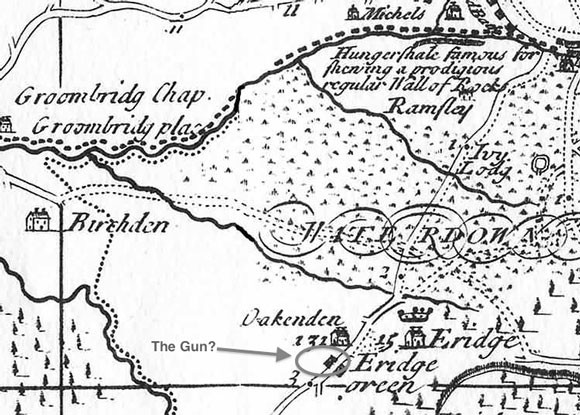 A map of the village in 1724, possibly showing the Gun Inn before it became the Nevill Crest and Gun

The village, Eridge Green, is closely tied with the Nevill family who arrived in England with William the Conqueror and settled at Eridge Park. Eridge Park is mentioned in the Domesday book, at that time being called Reredelee, when it was owned by a Lord of the Rings sounding character called Odo, the brother of William the Conquerer. The Nevill family inherited the estate in 1448 and have been here ever since: over 560 years.

Eridge had a forge which was established before the 1500's but until 1550 it only produced wrought iron implements. The Nevill family invested a great deal in this forge, constructing mill ponds to give a regular supply of water, and from 1550 the forge produced cannons. One of these cannons came to be sited at the front of the pub, where it was fired on high days and holidays:

For hundreds of years an ancient gun, made of strips of metal held together with hoops, like a barrel, was fired on fair days or days of celebration. The people collect money to put in gunpowder to throw the shell to a hill about a mile distant. The weight of the shell sinks it so deep in the earth, that it costs no little pains to dig it out after each discharge, which is repeated as long as the money lasts.

It is this gun that is referred to in the name of the pub, but it was stolen from the front of the pub some time ago. 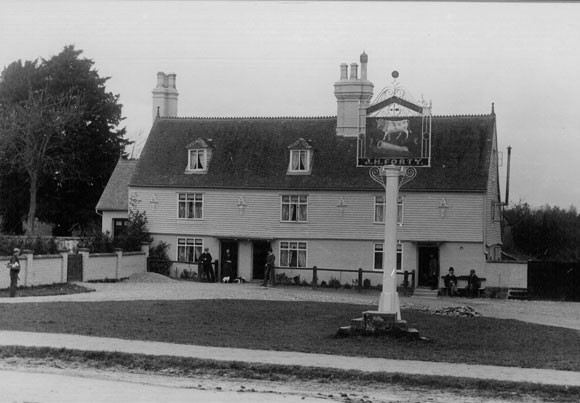 Before we started work on the restoration of the building, we commissioned a full structural survey. The original structure is some 500 years old, and would have originally been a dwelling for farm workers. In this initial form it was a timber-framed hall house. The main hall would have had a crude hole in the roof to allow smoke from the central hearth to escape, and people would have slept on raised platforms or cots, with beasts also being housed within the building. What survives from this period is exceedingly fragmentary, but the evidence suggests the house was probably of four bays, comprising a northern service bay, a two-bay central open hall, and a southern parlour. Both the parlour and services would have had first-floor chambers over them. 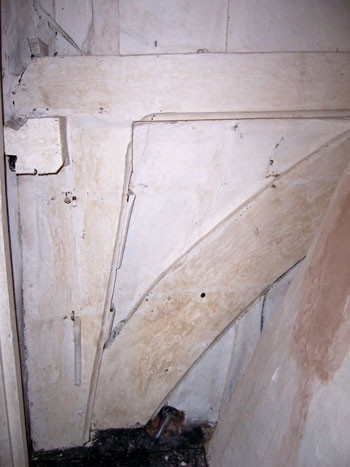 We came across some extraordinary roof trusses that date from this time.

In the 16th century/early 17th century the house was upgraded by inserting into the hall a good-quality chimney stack with a moulded lintel to its fireplace.

The furthest back in the records we have so far managed to journey is a report from 1790, when the pub was called the Gun. In 1841, Charles and Lydia Hooker were the landlords, helped by their two sons, a daughter and a servant. At that time, the pub was called the Eridge Green Inn. By 1851, the pub was renamed the Nevill Crest and Gun, but by 1875 it had been renamed the Bull and Gun. By the time 1881 comes around, when William and Elizabeth Rannier had the pub with their son and daughter and a servant, the pub had reverted to being called the Gun again, but the following year, landlord Tranmer William renamed it, yet again, the Nevill Crest and Gun.

The discovery of the springs

The town of Tunbridge Wells owes its birth to the discovery of the chalybeate (iron bearing) spring by Dudley, Lord North, in 1606. In poor health due to over-indulgence at the court of James I, the twenty-five year old nobleman was staying at Eridge Castle with Lord Abergavenny.

While riding along what is now known as Eridge Road and London Road, he noticed some orange coloured water which he recognized as coming from a chalybeate spring similar to those at the German resort of Spa, which were already famous for their supposed health giving properties. Borrowing a cup from a nearby cottage (said to have stood on the site of the present Fonthill pavilion), he tasted the waters and confirmed his initial impression. Subsequently, Lord North began to drink the spring water regularly and claimed that it restored him to perfect health. He wrote:

These waters youth in age renew
Strength to the weak and sickly add
Give the pale cheek a rosy hue
And cheerful spirits to the sad. 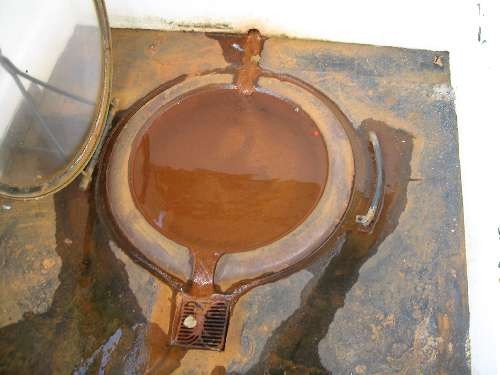 News of the discovery spread rapidly, and in 1608 Lord Abergavenny obtained permission from the Lord of the Manor of Rusthall (as the spring was on the edge of the Common) to sink the first well on the site for the convenience of visitors. 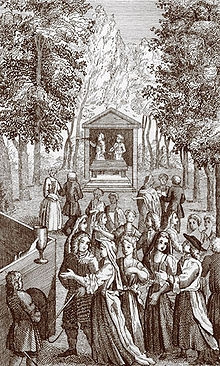 A contemporary engraving of
the chaylbeate spring, which
developed into Tunbridge Wells

Mrs Humphreys, the occupant of the nearby cottage, is said to have become the first 'dipper', inaugurating a long tradition whereby the women dispensing the water were appointed by the Lord of the Manor. There were no actual buildings in what was to become Tunbridge Wells until 1636, but the town developed rapidly in the late 17th century. Eridge House in 1785, two years
before it was demolished to make
way for Eridge Castle

In the 1573 Queen Elizabeth I stayed in the Eridge Park hunting lodge for 6 days on her journey through Kent and Sussex when she visited many local influential families.

In 1787 Henry Nevill, the 2nd Marquess of Abergavenny, began building Eridge Castle in exuberant Strawberry Hill Gothic style and in the years following, the landscape was enhanced by opening up vistas, walks and carriage drives, the construction of follies (most notably Saxonbury Tower and the castellated wall at Sham Farm) and the rebuilding of old workers' cottages in ornate Estate style. The Prince of Wales was a frequent visitor at Eridge shooting parties in the late 1800s, as was Disraeli who, it is said, came here for the venison and strawberries.

In the late 1930s the Castle was demolished and the current Georgian style mansion house was built, which is now the home of the VIth Marquess of Abergavenny and his family.

"Grandad (a butler to the Abergavennys, was a verger at the very beautiful Eridge church and so every Sunday Granny and I would walk down the drive to go to the morning service. The Marquis and family were always in attendance and at the end of the service the Marchioness would speak to Granny, passing the time of day, and she always asked me if I was enjoying my stay. I was taught to curtsey and say "Yes milady". If we were very lucky she would invite us to get in the very grand car and ride back to our house. She was, I think, a much loved lady. I have so many happy and gentle memories of Eridge."

Having started his career in his teenage years at our sister pub The Hare, Tom decided it was time to return to his roots and has recently joined us here at The Nevill as the General Manager. He brings with him a great sense of humour (so he says) and a wealth of experience having spent nearly twenty years in the hospitality industry. Be sure to join him, his wife and their two boys on their monthly pub walks, and do not be surprised to find him enjoying a pint of real ale at the end of it!

Jon is our amazing senior sous chef, when not cooking up a storm he likes football and rum. It is rumoured he spent a summer in a Mexican prison, or that might be a film I once watched, hey ho. Jon is the proud owner of a tortoise, Denzel, and three turtles, Del boy, Marlene and Rodney, obviously...

After 20 years in the trade I can honestly say I have never seen a KP work as hard as Chris, always with a smile he weathers the most severe storms in the NC&G kitchen. Chris is a fan of '40's and '50s tunes particularly the Andrew's sisters, for those of you too young to remember they were really sisters and are famous for such hits as, Boogie Woogie Bugle Boy, Beer Barrel Polka, and Shoo Shoo Baby. A lover of all things Aspall's Chris enjoys heading out with his mates on a Thursday evening for a few drinks...

Karen is the Nevill's very own glamorous and doting granny, not that she looks old enough. She has proved herself to be a reliable member of team and flies the cleaning flag high each morning. Karen is an early riser and is of the "get in and get on" breed. She is a popular member of the crew and always has a cheery comment for everyone. Karen enjoys foreign travel, spending time with her family and bargain hunting in the high street discount shops.

Graham, AKA Magnum P.I. for his likeness to Tom Selleck (or perhaps its just the moustache), has been a fireman for 37 years but has chosen to hang up his fire-proof boots for a more subdued life. Unfortunately there's plenty for him to do around 'the Gun', but if Graham can't fix it then it isn't worth fixing. 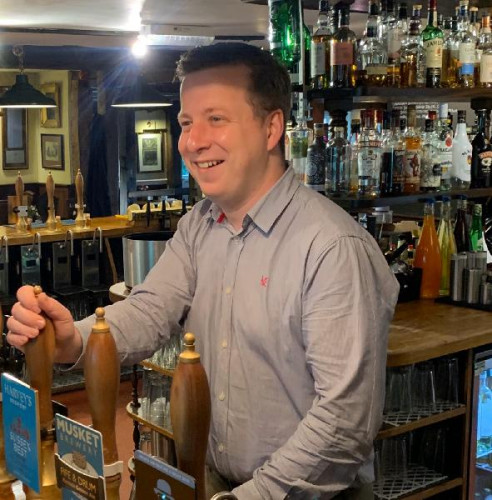