Thelwall is unquestionably a village of great antiquity, and was first mentioned in the Anglo-Saxon Chronicle in the early 890s.  Most reliable sources claim the name is derived from the Old English 'Thelwael', meaning 'deep pool with a plank' or 'pool with a plank bridge'.  Records show that in AD 923 Edward the Elder, son of King Alfred, visited the place and for some time made it his residence with soldiers garrisoned there.

He ordered a burh (a barrier made from wooden stakes) to be built as a defence against the Danes and the Northumbrians, as the site was an important crossing point of the Mersey.  It was a mistranslation of this word burh, which means military fort, which might have led to Thelwall erroneously being described as a "city": an inscription on the gable end of the Pickering Arms in the village reads, "In the year AD 923 Edward the Elder founded a city and called it Thelwall".

The story that Thelwall is the smallest city in the UK persists however, though no charter has ever been recorded.

The village passes from the records and is not mentioned in the Domesday Book of 1066, so it may have been abandoned once the need for the garrison had passed. 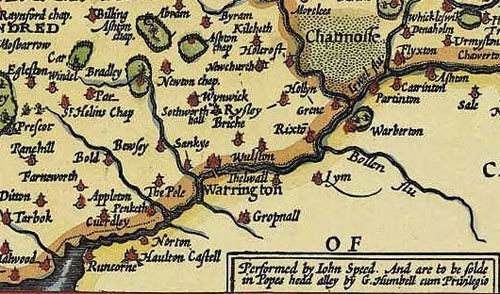 The village of Thelwall in a map
by John Speed, 1610

There is a story that the house that subsequently became the Little Manor was built for a general in Oliver Cromwell's New Model army in 1642, but the dates do not add up - in 1642 Cromwell was still an MP and governor of Ely, and wasn't promoted to colonel until 1643 in the new Eastern Association army raised by the Earl of Manchester. He was promoted to Lieutenant-General and second in command of the army in 1644.

The story has it that this general lived at Thelwall Cottage for many happy years, and was romantically involved with his housemaid. One day however he tried to disentangle himself from the relationship, and she murdered him in a fit of rage. Overcome by remorse, she then hanged herself from a tall fir tree in the driveway. Such is the legend, anyway, though closer investigation casts doubt on the veracity of the tale.

The history of the property

For the following account, we are indebted to local historian Michael Taylor, who has given invaluable help in explaining the history of the building. The following information is taken from his book 'No Mean City - A Local History of Thelwall in Cheshire', which can be purchased from the post office in the village. 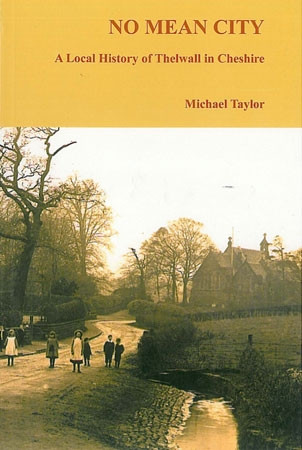 No Mean City - A local history
of Thelwall in Cheshire, by Mike Taylor

The property which became the Little Manor was originally built for the Percival family, who, it is believed, moved to Thelwall around 1660 from Latchford. They were farmers, and became freeholders, and it is reported by a previous resident that there is a date stone in the property for 1660, although we have not located it to date. The pub sign is taken from the coat of arms of the Percival family, which was embedded into an upstairs wall. The property was itself called 'Percivals' at that time, presumably until it changed hands some 100 years later. 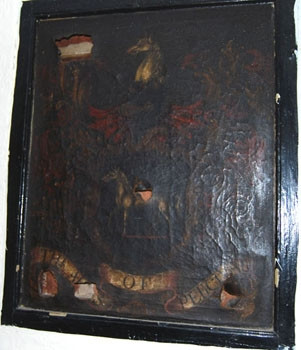 The coat of arms of the Percival family,
on a panel embedded in an upstairs wall 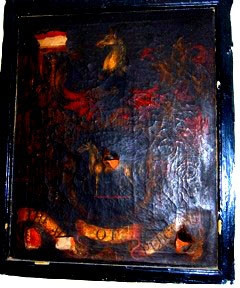 By the 1700's, the Percival family had come up in the world, and one branch of the Percivals moved to Warrington. Both sides of the family had sons called Thomas Percival, both of whom led successful and fruitful lives.

The Warrington Thomas Percival became a doctor and wrote a book on medical ethics, which subsequently became the basis for the Code of Ethics of the American Medical Association, drawn up in 1849.

His cousin, the Thomas Percival who remained in Thelwall, held several public offices including Coroner of the Honour and Fee of Halton, and Surveyor of the Highways. He was the equivalent of a modern Quantity Surveyor, and acted as agent to two generations of Pickerings, the Lords of the Manor of Thelwall who lived in Thelwall Hall. In this role he was responsible for much of the expenditure of the family, which he meticulously recorded in a series of pocket books, three of which survive to this day. The Percivals lived in their house happily for over 100 years, until the 1770's when they sold the property.

Around this time, the Stanton family enter the picture. John Stanton was a successful trader from Liverpool, exporting and importing to and from the West Indies and Africa. One of the most successful products he traded was gunpowder, so in 1750s or thereabouts he established a powder mill in Thelwall to manufacture gunpowder himself. It was a substantial concern, and by 1760 John Stanton was living in a large house in the village, Bank House. In the 1770s the family moved up the property ladder and built a new mansion in the village called Greenfield.

Greenfield became the principle residence of the Stantons for the next 150 years, although soon afterward the built the mansion, they bought another substantial house in Thelwall for use by other family members. That house was Percivals, which became known by the family as the Cottage, and was used as a 'cadet' house - once married, the eldest son moved in there while his father lived across the road at Greenfield. Bank House was also retained, for use by other members of the family.

All this came to an end though in June 1858, when a huge explosion destroyed the powder mill, which was never subsequently re-built.

By 1891, records show that a Harry Holden, mechanical engineer, lived in the Cottage with his three sons. 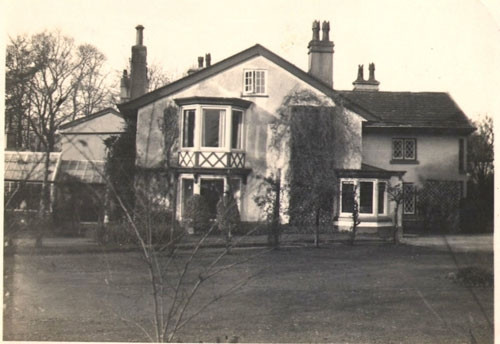 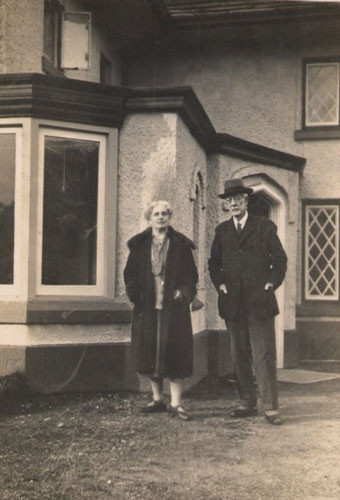 Henry Holden lived there up to 1948, when he died, and in 1950 it became a hotel known as the Cottage Restaurant and Guest House, although it wasn't as large as it is today. At that time, the property consisted of a multitude of little rooms, unlike the more open-plan layout of today.

It is not known when one of the several breweries who ran the pub changed the name from The Cottage Restaurant and Guest House to Little Manor, but the change of name came about sometime before 1984. Apparently when the building was subject to some restoration work, a suit of armour was discovered on the site, although that's as much as we know.

We are much indebted to Mr and Mrs Walker for help with this history - they had their reception at the Cottage Restaurant in 1962, and are looking forward to having their Golden Wedding Anniversary here in October, which will be fun.

(Many thanks to local historian Mike Taylor for his extensive research, without which very little would be known about the history of the Little Manor)

Jill began her Brunning and Price career at Pen Y Bryn in Colwyn Bay where she lived for 36 years, before taking the reins here at Little Manor in 2013. Her biggest love is food and wine, so loves nothing better than sampling the best menus across the country! She's Mum to four boys and a doting Nana to her adorable grandson.

Since Steph was young, she's always had a keen eye on the customer services industry. She is lovely, hardworking and always willing to help, and her ambition is to run her own pub in the future.

James or jim as we call him, is a big part of the family here at Little Manor. You'll find him at the pub one way or another... If he is not working, he will be here on the other side of the bar working his way through our amazing selection of rums!

Anna has been with us for a couple of years now and felt it's time to step up and join the management crew. She is dog mad and has two springers which keep her busy in her spare time. Anna also enjoys eating out and has developed an interest in wine.

Fraser loves music, food and finding new exciting craft ales and rums to bring back to the pub! His auburn red hair and colourful shirts make him hard to miss, with an outgoing and friendly personality to match.

Sophie has been with us for 8 years on and off. She is an active outdoorsy gal, and enjoys long walks with her fur-child (dog). Sophie is the queen of selfies and a social butterfly.

When Kiran joined Little Manor it was only meant to be a summer job while she was studying at the University of Liverpool. 3 years later and she never left! When she's not at the pub (rare) Kiran can be found baking something to share with her friends and family. With evenings off, she's normally out trying new restuarants!

Jenny is from Warrington, and has worked in hospitality since her first job 12 years ago and she fell in love with the rush it involves. She loves eating out or letting Alex, her chef boyfriend, cook for her and trying new foods and dishes from all over the world. Travelling to new places and tasting their traditional dishes is a passion of Jennys'. She tries to balance all the eating with exercising and enjoys more interesting sports like rock climbing and trampolining. She has a degree in theology from the university of Leeds, although she mostly enjoyed the city and its bars!

Alex is becoming something of a B&P journeyman, having previously worked at both Pen-Y-Bryn, the Wharf and Little Manor! We're determined to keep him here though for as long as we can as he's a fantastic chef and a great character to have in the kitchen. Being a chef he's right into his food and if he's not in work he's usually eating out doing 'research' for the pub.

Ollie's our head chef's right hand man. He grew up in Warrington but moved to France at a young age where he studied to be a chef. He's a keen traveller and has been all over the world, but couldn't resist coming back to Warrington to settle down.

Jack is from Warrington and trained at the local college to become a chef. In his spare time he enjoys playing golf and watching his home town club the Warrington Wolves. Jack also enjoys exploring the world of gastronomy and adapting modern techniques into his cooking.

Richard is originally from Aberystwyth in Wales, He moved to Warrington in 2018 and worked in nursing until he started at Little Manor in 2021. His passion is motorcycling having raced and re built many over the years. He enjoys gardening and being out in the fresh air. 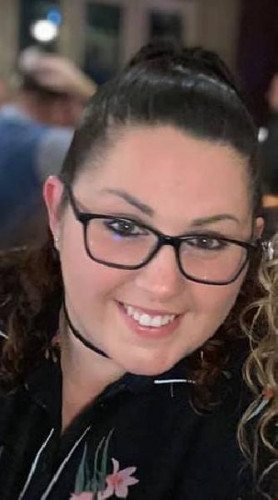