Considering it is a venerable old building, it has to date proved surprisingly difficult to track down the history of the Greyhound, but the best estimate has it that the pub is about 400 years old. It was a former coaching inn that stood on one of the major turnpike roads from Oxford to the West Country, and as such at one time it had a blacksmith's forge attached to the pub to the facilitate re-shoeing of horses. 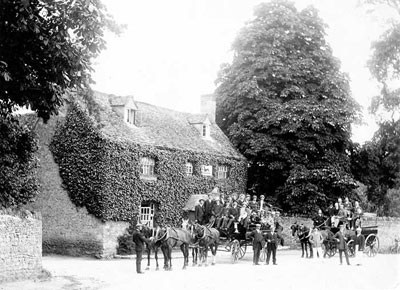 Above is a photograph of an outing from the Greyhound at the turn of the century. Organised outings to places of interest were common and were often arranged by Friendly Societies as in this case. Working people joined these Friendly Societies in order to enjoy the social occasions, as well as for the important aspects of saving and sickness benefits in an era when the NHS didn't exist.

It is believed the Greyhound was a Morland Brewery property. A farmer, John Morland, set up a brewery in 1711 in West Ilsley in Berkshire, and the local ale and porter was sought after in London's public houses. During the 1860s, Morland acquired the Child family's Abbey Brewery in Abingdon and then the Eagle Brewery, also in Abingdon and the whole operation re-located there in 1880. Over the following century, the brewery took over and closed some seven breweries in the area, before itself being purchased and closed by Green King in 2000. Such is the predatory nature of the brewery business. 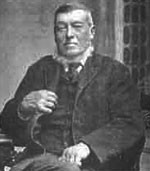 1818, the Innkeeper at
the Greyhound was Alfred White

In 1818, the Innkeeper at the Greyhound was Alfred White. He was a busy man, for he also ran a bakery, the village shop and a forge. He became interested in the workings of bells following his instruction in the art of campanology when the three bells at Appleton Church were recast into a ring of six, and he decided to use the forge to facilitate his work with bells, and many oak bell frames were constructed in the yard at the rear of the pub. He started trading as A. White, Bellhanger and eventually took his sons into the business and traded as A. White & Sons. Even in these early days he was doing work all over the country, including work at several Cathedrals, and to this day Whites of Appleton Ltd is the oldest continuously trading bell hanging company in the United Kingdom.

In the second world war, American Troops were billeted in a tented camp in Besselsleigh. Peter Nurse describes his time at Besselsleigh as an evacuee during the second world war: "Then there was the arrival of the Americans - I believe it would have been during 1942 that they were first sighted. They were so different to our troops - their uniforms were so much smarter and their accents were very strange to us then. They established a tented camp just up the road from the Greyhound at Besselsleigh and naturally it became their local. This was viewed with mixed feelings by the locals as beer was in short supply and the Yanks were drinking most of it!"

This photo was taken a little later in the 1950's when the road came right up to the front of the pub. This photo was supplied, very kindly by Jeffrey Heavens who has also given us a brief description of his time as landlord: 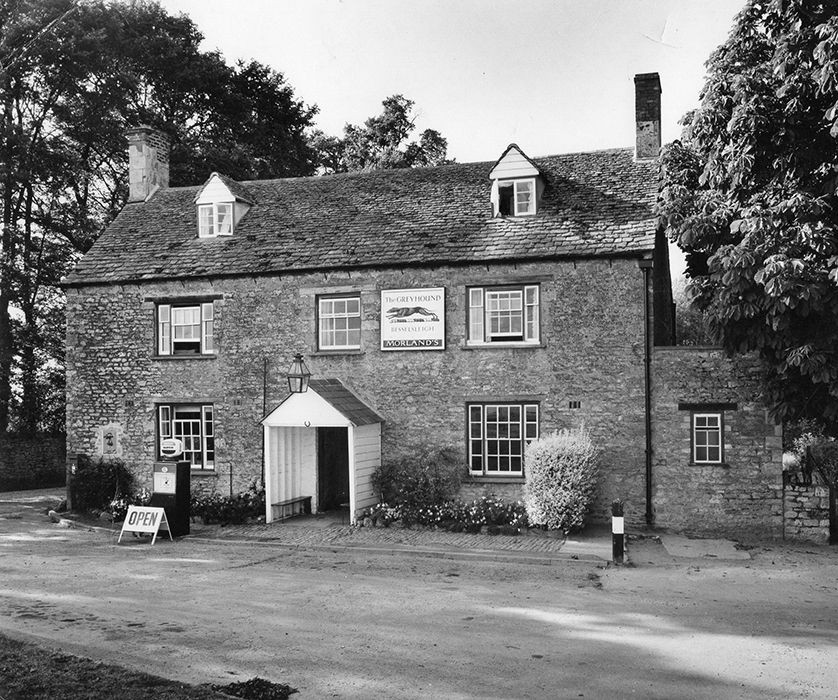 My family had a 61 year connection to The Greyhound. My Grandparents, William and Edith Cook took over the tenancy in 1927 and after William died Edith carried on until I took over in 1963. My wife Isobel and I ran the pub until 1988 when it had become famous for the jacket potatoes that we sold, in fact most of the people around here referred to it as the "Spud Pub".

He has also provided us with a great piece of information about the Greyhound sign: The Greyhound depicted on the sign is part of coat of arms of the Lenthal family, The First Speaker of the House of Commons, who, at one time owned the pub as part of their estate.

James loves pubs and people. After a long history in hospitality, James returns to where he was born and raised, sunny Oxfordshire! Always warm and welcoming, you'll generally find James doing what he loves - looking after guests and helping his team.

Lucy is a welcome member to the team, having lots of experience working in a local pub. She has a huge wardrobe full of sparkly tops that brighten our days here at the Greyhound. Lucy was an extra in the Harry Potter films and can be seen third row from the back on the left at the Quidditch tournament.

Shauna (said Shona!) is a pub girl through and through, having grown up in one, run one and now organising the rest of us wannabes in one. She has a positive outlook on life and loves a night in with a good film and a Chinese takeaway.

Ilona came to us for a change from working at another local pub for over 10 years! she is a full time mum and manages to come and help us out at lunch times during the week. If Ilona does get some time off she loves a good music festival and a Friday evening G&T, and we think she deserves it!

Carolyn is a well recognised member of the local community having run a local post office for many years with her husband. The time has come for a change tho so she is now treading the boards at the Greyhound. Carolyn love nothing more than a sunny holiday to top up her tan.

David is originally from Germany and moved over to the Uk aged 13. He is studying to be a vet and works with us around his studies and placements. David bears an uncanny resemblance to a young Patrick Swayze, unfortunately he is not much of a dancer.

Matty started with us as a Kp and has worked himself up the ranks with hard work and determination, he also won our company food comp a few years ago so is a very talented chef to boot. Always up for bants and lol's, he is a lads lad and never turns down the offer of a beer or two. He and Rob have perfected a number of Greyhound inspired parody songs over the years, why not ask him for a rendition next time you see him.

Emma not only holds her own with the lads behind the pass, she is the un-official boss of the Greyhound kitchen, making sure everyones doing what they are supposed to. She has a little girl called Freya with her partner and loves nothing more than a good old shopping spree.

Having just moved to the UK from the Philippines Jose has left behind a business empire to learn the ways of B&P and add classic English cooking to his repertoire. Maui is his nickname and there is a funny story behind it, ask him about it sometime.

Tiago is our ex head chef. He left to pursue other interests but the draw of the pass was too strong and he now does the odd shift to help out when needed. Originally from Brazil he brings that carnival energy to his time in the kitchen.

know by all as Taz, he is a local lad that has never left the UK. He it English thru and thru and proud of it. Taz has been working in kitchen for 6 years and brings a level head and a lust for learning with him. Taz loves his motorbikes and loves nothing more than a Sunday jaunt, when he is not working of course.

Speed by name and speed by nature, when he is not whizzing around the kitchen John is careering down a mountain on his bike, racing in competitions. John rarely relaxes but on occasion he will unwind after work with his preferred drink, elderflower presse.

Ange has been with us since day one and knows everything that goes on in the kitchen. A master at prepping, if you have had a meal at the Greyhound, chances are Ange has made something on your plate. We call her the bionic woman as she has had two replaced hips, two knees, right shoulder, left elbow, six knuckles and a little toe! Better...stronger...faster!

Rebecca is not only one half of the best cleaning duo in the company, making the Greyhound the cleanest pub you've ever seen. She also takes care of our decorations and interior design with a keen eye for detail. Rebecca is always on the look out for a bargain when shopping for decorations and has a very witty sense of humour.

Debbie was a real find! She has a great smile and a happy personality, she is a local girl, and when she came for her interview it turned out her and Linda used to work together years ago. She also loves gardening so her coming here was written in the stars. Debbie used to work unsociable hours in a kitchen, and now she has more time on her hands she plans on spending more time with her husband.

Please note - we only take bookings for our inside tables. Outside tables are available and are allocated on a first-come-first-served basis.

For parties of more than 10 guests please contact us directly via phone or email and we'll be happy to help you organise this. 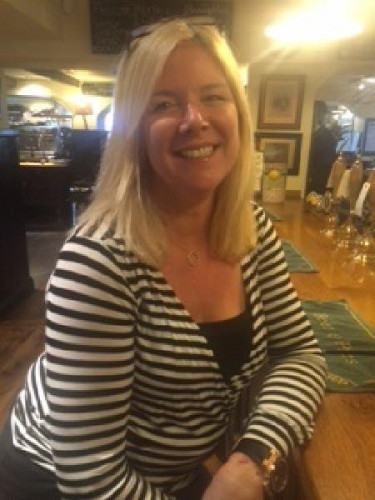 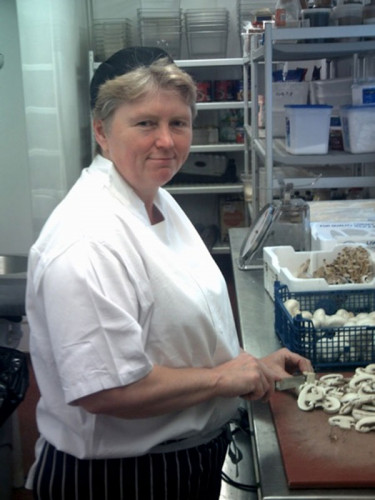