The pub was named after the local landowners, the Tollemache family, who were the Earls of Dysart. Their coat of arms is above the door. Originally the building, which we believe dates from the mid 1700's, was a farm belonging to the estate. The Tollemache family themselves had a small-holding of some 25,000 acres in Cheshire and extensive estates in Scotland, but lived in London at the family seat of Ham House in Richmond, a nice little pied-a-terre in town. 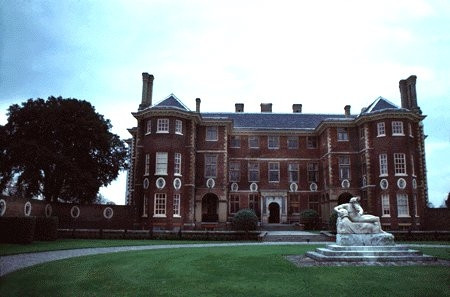 Funnily enough, the original pub was in the building over the road, now known as Orchard House, but it moved into the current premises in the late 1800's. Members of the Cheshire List at RootsWeb have helped establish the landlords from that time:

Beverly, who is Richard Rutter's great great grand daughter, tells us that he married for a second time in 1857 at St.Boniface, to Margaret Andrew, and their five children including her maternal grandfather's mother Ann, were born in Bunbury, presumably in what is now Orchard House. She's not sure how long Richard was at the Dysart Arms but, from 1878 until his death in 1891, he had the Shrewsbury Arms in Little Budworth, and in fact this pub stayed in the hands of various members of the Rutter family until the mid 1940s. Richard's mother and descendants owned the Red Lion in the same village for a good many years. His daughter Ann and husband ran the Cotton Arms in Wrenbury, and she then went on to own the Peacock Inn in Willaston....and there were other Rutters in pubs in surroundings areas.

In the nineteenth century the Dysart was simultaneously a pub, a farm and an abattoir, although the building that housed the abattoir has now been demolished. The abattoir supplied the butcher's shop on the other side of the church, but this is also no longer in existence, having been demolished by a bomb in the Second World War (the bomb was dropped by a German bomber jettisoning its load on the way back from Liverpool docks). 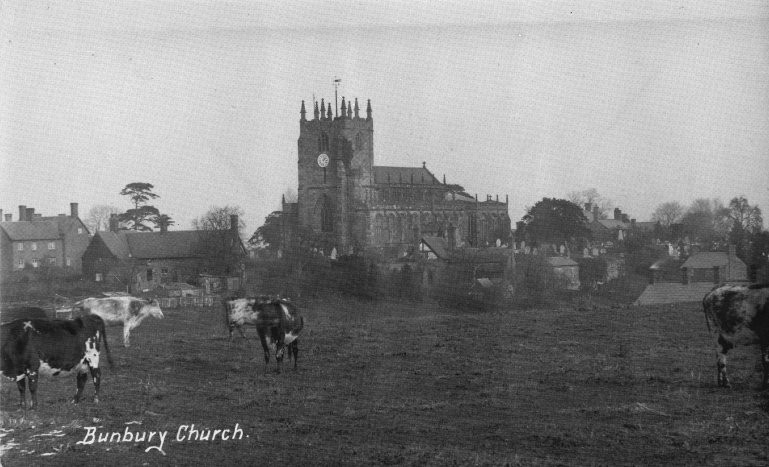 The Dysart Arms can be seen on the far left 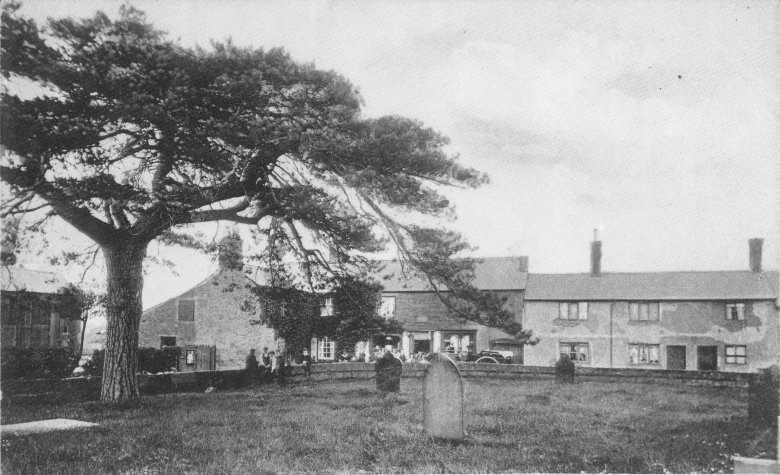 Looking across the churchyard towards
the old Post Office and the butchers,
destroyed in world war II

We bought the property in 1996 from John and Sue Lloyd, who had kept the pub in immaculate order, and who had laid the foundations of the gardens as they now stand. We converted the extensive outbuildings into kitchens, and connected them to the original pub building with a substantial conservatory, which worked very well and joins it all together into a seamless whole. 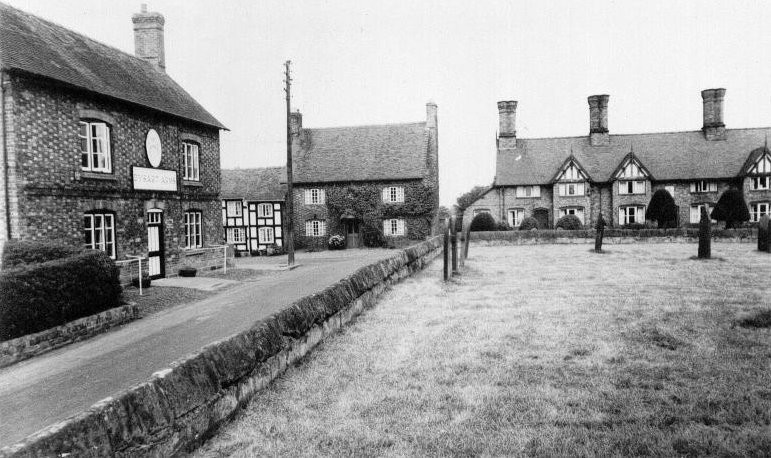 The Dysart in the late 1950s.
Reassuringly little has changed
in two generations
( Courtesy of Bob Welch)

The only difficulty we have with the Dysart is the lack of parking space, hence the retention of the hitching-rail for horses.

P.S. Are there any other old photographs out there we might include on this page? If so, give us a shout - Ed

Stuart is a born and bred Cheshire man who earned his spurs at The Dysart as a young lad. He studied Business and Information Management at Liverpool Uni but the pull of the pumps was too much to resist. After returning to B&P in 2012 Stuart soon flew the proverbial nest to take up his first role as General Manager within the company at The Rowbarge near Reading. Five years, a dog and a baby later, Stuart jumped at the chance to return tâ€™ North and take up the reins at The Dysart, especially given the fact his godparents owned and ran the pub many moons ago!

Johnathan is our resident beer guru. His baby is our cellar and boy does he look after it. Hailing from the Peckforton hills with his identical twin brother Michael. (They like to swap roles to keep us on our toes!) In his tenure here at the Dysart he's worked his way up and is a perfect host. When he isnâ€™t manning the pumps you will probably find him propping up the other side of the bar sampling the fruits of his labour.

Dot is a local Bunbury character who has stamped her mark on the pub - she originally arrived as a part-time kitchen assistant, but her natural hosting skills and easy manner have made her part of the fixtures and fittings of the pub. She keeeps a watchful and motherly eye over the young things, and is dear to the heart of all.

Taylor comes to us on her hat-trick return to Brunning & Price and we were so pleased she decided to come back for more. When not being our â€œhost with the mostâ€ Taylor spends her time with her lovely son Vinnie either taking long walks exploring new places with Nan, also our assistant manager, Dotty. Keep your eyes peeled as no doubt Taylor has the next pub walk in planning soon!

Paul is a Nantwich chap and had been in his family pub business; The Lamb at Willaston since leaving school. In October 2008, he felt it was time to spread his culinary wings and headed straight for the Hand and Trumpet, through the recommendation of a couple of regulars who also work for B&P, before Jamie shrewedly claimed him for the kitchen team at Old Hall. He's happy and loves cooking, so life is good.

Michael has quickly become a key cog in our kitchen. Persuaded to the pans by brother Johnathan he hasnâ€™t looked back since and strives to have his own kitchen in the future. The better footballer of the Hallam twins, be sure to ask him about new dishes or his beloved Everton FC if you see him enjoying a drink at the bar.

A true Bunbarian, which is what you are if you come from round here. Jenny is married with a daughter, Clare, and has been a lynch pin of the Dysart since day one.

Alan looks after every inch of the pub with ultimate care and attention with our garden being his greatest triumph! No issue is too big for Alan and this jack of all trades is definitely the master of all. Father to Head Chef Paul, Alan has himself spent his time running a pub of his own but has now happily swapped pulling pints for his watering can and screw driver! 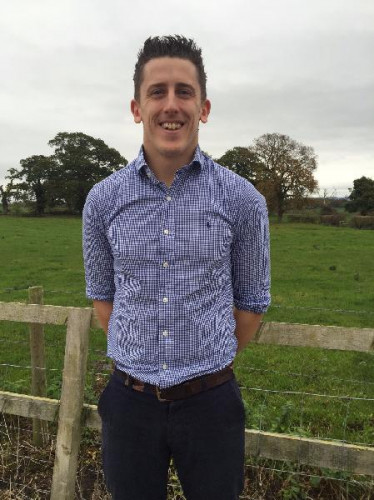 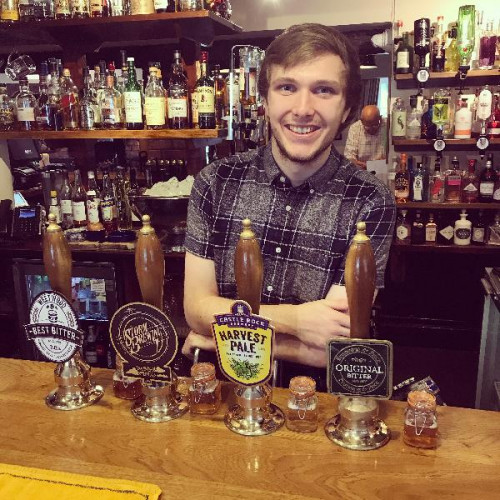 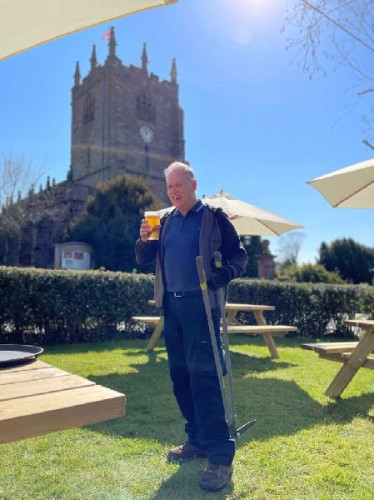