The legend of the White Hart King Richard's White Hart had golden
antlers and a golden crown around its
neck with a gold chain hanging from
the crown. Heraldically, the Hart
symbolises peace and harmony, the
White denoting purity.

In 1389 Richard passed an Act making it compulsory for pubs and inns to have a sign outside in order to identify them to the official Ale Taster, "otherwise he shall forfeit his ale." Consequently, a great many pubs were named "The White Hart", after Richard II's own heraldic emblem.

Cadnam is an important crossroads between Southampton, Bournemouth and Poole and it has been since the Medieval period. The village is said to have been named after a farm owned by a man called Cadda - in the times when names for places were being thought up, a farmstead was also known as 'ham', hence the merge into Cadnam - as it is known today. The White Hart was once used as a
stop over venue on the Cornwall to
London road when people would heard
geese all of that unfathomably long distance.

Cadnam is part of the New forest and is said to be the largest remaining area of lowland heath in England. It includes large unenclosed pasture land and has National Park status.

For many years after its creation in around 1079, the New Forest was the playground of Kings and the aristocracy, a place where the deer roamed free, and were hunted for pleasure and the pot.

William the Conqueror's second son, William 11, or William Rufus, as he was also known, hunted locally on a fateful day in August, 1100. An outspoken, bad tempered man with ruddy complexion, William was in the company of a group of friends and supporters, or so he thought. 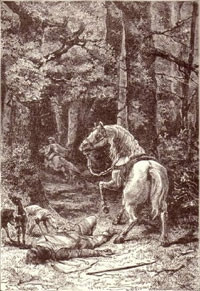 Whether by accident or design, William met his death that summer's day, victim of an arrow allegedly shot by Sir Walter Tyrrell, an Anglo-Norman nobleman possibly acting under orders from William's younger brother, who immediately took the throne as Henry 1. 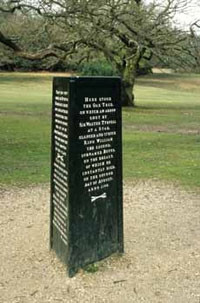 The Rufus Stone in Canterton Glen, near Minstead, 2 miles south of Cadnam, commemorates the event, and it is claimed the stone marks the place of William's death. The stone was erected by Lord Delaware, of Bolderwood Lodge, in 1745, but was so damaged by souvenir hunters, who chipped off bits to take home, that in 1841 it was encased in the commemorative metal surround that can still be seen today.

The true origins of the New Forest ponies are a mystery, but legends have it that they swam ashore from a wrecked Spanish galleon.

The ponies are part of the landscape - and have been an important part of forest life since at least 1016. In order to increase the quality of breed in the forest, many different types of horse were introduced to create the rich diversity desired. Indeed it is said that Queen Victoria lent out one of her Arab horses for 8 years to help improve the breed. The ponies seen today will be a combination of Dartmoor, Exmoor, Welsh, and Highland, among many others.

Many of the ponies share very similar characteristics, they usually stand between 12 and 14.2 hands high, they have a long head with a short neck and are considered 'hardy'. The ponies are intelligent, docile and friendly - which makes them very popular with visitors to the New Forest.

Until the Bronze Age the New Forest was covered in trees. This was the time of change when clearings were formed for pasture and cereals. With the deterioration of the soil the land was only fit for coarse grasses, bracken and heather so man introduced domestic animals. The Romans added a couple of forts, a pottery industry and one or two straight roads.

The New Forest was born in about 1079 A.D., when William I created it as a royal hunting preserve. The Assize of Woodstock (1184) set out penalties for interfering with royal sport, when poaching could mean death. These penalties were in force until 1217 when the Charter of the Forest replaced them with fines, bringing revenue to the Forest. Royal hunting in the New Forest lasted until the late 17th Century. The 15th Century brought the conservation of larger trees for Crown timber with more areas being enclosed to stop the animals harming the trees. The first act was in 1483 with many more to follow. 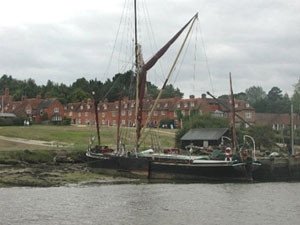 The port of Bucklers Hard was built on Beaulieu river by John, 2nd Duke of Montagu, to land his sugar from the West Indies. 50 ships were built there from New Forest oak for Nelson's navy, including Nelson's favourite, HMS Agamemnon in 1781.

The rising food prices of the early 19th Century saw the onset of smuggling and highway robberies. The numerous natural creeks and inlets around the coastline made life easy for the smugglers to get their contraband into the secrecy of the Forest. The most popular routes were along the glen at Chewton Bunny, near New Milton, and up the Beaulieu river. However, if caught both smugglers and highwaymen would be hanged from the Naked Man, an oak tree, part of which still stands today at Markway on the A35. 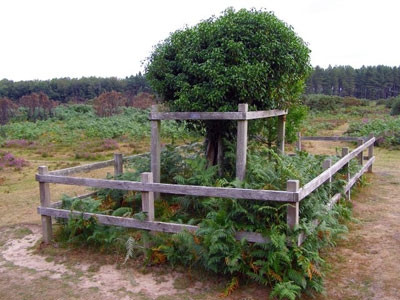 In 1847, the railway link from Southampton to Dorchester brought the first visitors to the New Forest. It also brought Queen Victoria's army to the area, needing more room for manoeuvres. 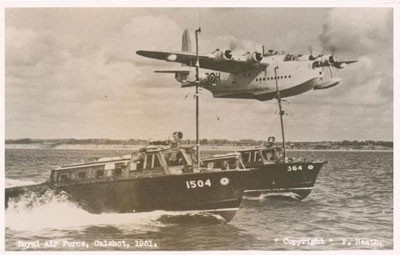 At Beaulieu Heath, the New Forest Flying School was taken over by the services, and in 1920, RAF Calshot became a training unit for flying boats. 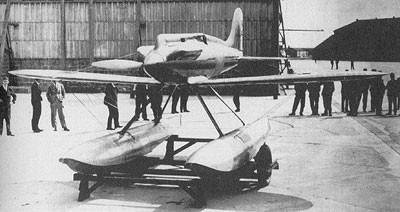 In 1929, Britain won the Schneider Cup with one million people watching from the Solent coastline.

Calshot was one of the coastal stations which helped to defend the Channel, and many pilots learned to fly at Calshot with an excellent war record. 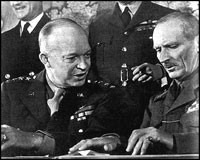 Generals Eisenhower and Montgomery took over the Balmer Lawn hotel as their operations headquarters for the invasion of Europe in 1944. Anti-aircraft emplacements were dug and Hurst Castle was a good observation post for any invasion from across the Channel. Once again, the Forest provided thousands of tons of timber for the war effort and crops were grown to help with food production.

The Normandy Landings began on the 6th June 1944, when 130,000 troops set off from the south coast of England (including some from the port at Bucklers Hard, where Nelson's ships had launched 150 years earlier) and landed on the beaches of Normandy - Operation Overlord had begun. 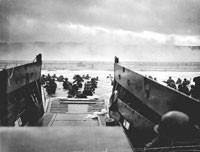 After the war, the increase of motor cars meant that there were more road accidents involving Forest ponies and cattle so the main Bournemouth road was fenced off. More traffic meant more visitors and more visitors meant more damage to the vegetation. To lessen this damage, car parks and picnic areas were set up and designated camping sites were formed. The New Forest today is comprised of 1/3 timber enclosures and 2/3 heathland.

As more people moved into the New Forest area to live the towns and villages grew, providing more amenities for the growing number of visitors. By the end of the 20th Century, the New Forest saw more than 10 million visitors each year.

A Birmingham fellow who found his passion for hospitality working in Florida and New York. A degree in Hospitality Management soon followed and has now progressed to run his second pub within B&P. Out of work he can be found making anything out of wood, playing golf or spending time by the coast with his partner Anna and the doggo Ben :)

Tracy joined B&P 4 years ago and has worked her way up from supervisor to assistant manager. Tracy enjoys the social side of the job and loves to have a chat whilst serving customers. When she is not at work Tracy will be found spending time with her family and has recently had a grandson.

Maria has only just joined the family. She has many years of experience working in pubs and restaurants and loves nothing more than meeting new people and making them feel at home at the local pub. In her free time she loves to travel and explore on city breaks, so if you need any travel tips, head to the White Hart and see Maria!

Scott has been with B&P for almost a year, but used to be with us when he was 18, just over 5 years ago! In between then and now heâ€™s been learning lots about the industry working in hotels and has come back to use his new skills with us. An aspiring sommelier, he is passionate about wine, food, and great customer service.

Alex joined B&P just over a year ago and has been a favourite with the regulars ever since. Having been to over 500 Southampton FC gains across the globe he is our go to guy for anything football. Alex, has been working in pubs from a young age and loves the social aspect of meeting new people.

Ryan has always had a love for hospitality having previously been a General Manager but has long followed his passion for the kitchen and took up numerous Head Chef positions in the New Forest before joining the pub family. In his spare time, he can be found trying new food around Hampshire and spending time with his wife, Erin and two kids.

Mick is a Wiltshire born man, who discovered his love for cooking at school, which has continued for 35 years and has now been working at the White Hart for over 4 years. Mick enjoys watching sports in his spare time, especially football and also enjoys spending time and eating out with his partner, Roni. 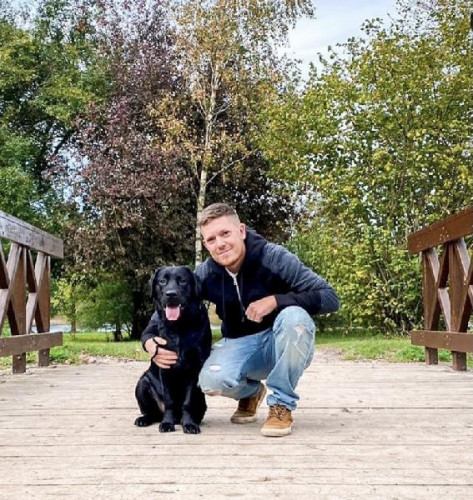