When the Domesday Book was compiled, about 1085, the land of Eversley belonged to the Abbey of Westminster. The Domesday Book tells of two mills in Eversley, worth one hundred and five pence, and a wood worth thirty shillings, a contrast to that at Farnborough, which was worth two pence. As the value of the wood at Eversley is such a large proportion of the whole sum, the greater part of the land must have been woodland. In fact, it gave its name to a Forest under the Norman Kings, for "William de BraybÅ“uf made a park at Hackwood in the Forest of Eversleigh in 1280".

Eversley's ancient origins are suggested by its name, which is derived from the Anglo Saxon for 'eofors leah', the field or clearing of the wild boar. "It is my decided opinion," said Mr. Isaac Taylor, author of Words and Places "that the name Eversley is one of the few remaining records of the former existence of the wild boar in England. Eofor - wild boar, Anglo-Saxon, would take the English form Ever. The second syllable is the Anglo-Saxon leah- a boskey place, a sort of open pasturage, more or less wooded, like the under-closed glades of the New Forest." Eversley was spelt "Eversleigh" in Parish Records until 1748.

There were 4 manors in Eversley, but the exact sites of these is unknown. It is believed that in 1702 the manors of Everlsey and Bramshill were bought by Sir John Cope and a mass transformation of the village occurred, including the construction of Warbook house in 1724. 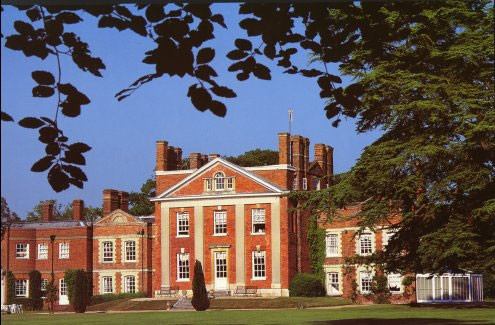 The Church of St Mary, Eversley

It appears from the Charter granted to the Abbey of St. Peter's, Westminster, by which it became possessor of Eversleigh Manor, that a Church was included. This Charter is dated 1050.

An early tradition tells us that a small church, on the site of the present one, was a Sanctuary for Deer-slayers. Another tradition places a Hermit's Cell there. The latter may have grown from the fact that "A Hermitage was endowed at Strathfieldsaye in order that the Hermit might direct travellers through the forest of Eversley. It was "common practice to place Hermits at parts of forests, to direct and help wayfarers. In return for which the Hermits received the alms of the Rich and the thanks of the Poor."(Col. H. Stilwell).

Reverend Charles Kingsley (1844-1875), author of 'The Water Babies', is one of Eversley's most famous residents, and it was while living in Eversley that he produced some of his most famous works and became an established writer. Mr. Kingsley had been Curate of Eversley, when he lived in a thatched cottage at the corner of the Cross green. He then described the Parish as "peculiar for nothing but want of houses, and abundance of peat bogs. My parishioners are remarkable for aversion to education and a predeliction for fat bacon." But the next year, when he believed he was leaving Eversley for ever, he wrote of it as "this beloved place," and he returned with joy in 1844 to be its Rector for the rest of his life. 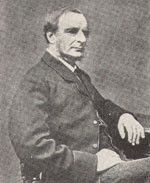 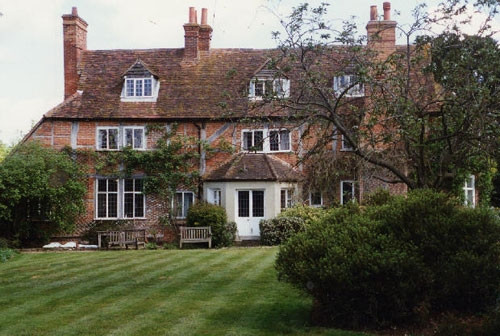 David Welch, a resident of Eversley, has passed on an account of a Mrs Welsh's acquaintance with the Rev. Kingsley. By all accounts she always enjoyed talking of him, and her fine old face was full of animation and pride when she said that he would carry her home from school when she was a tiny child. She remembered seeing him bearing big cans of soup from the Rectory when an epidemic raged, and leaving some at each cottage. He was welcomed everywhere as a great friend, as well as the Parson, and the children ran after him calling "Daddy, daddy."

In those days Mrs. Welch (then Elizabeth Chandler) and other children were terrified of going near a certain house where a ghost was said to appear at dusk. One summer evening they met Mr. Kingsley and told him of their fear. She remembered he said, "There are always more Spirits in the air than there are gnats now," and he pointed to a cloud of gnats in the twilight. "But God does not let you see them, because you would be frightened by them, and He never frightens children.'

In 1860, to everyone's surprise - including his own - Kingsley was appointed Regius Professor of Modern History at Cambridge. His inaugural lecture "The Limits of Exact Science as applied to History" was followed by a series concerned with the rise and fall of the Goths, subsequently published as 'The Roman and the Teuton'. Charles Kingsley is also responsible for the impressive Wellingtonia trees lining Wellingtonia Avenue. His daughter Miss Rose Kingsley wrote "The largest tree in the Churchyard is a fine Wellingtonia, a seedling from a cone my father picked up in the Mariposa Grove in May, 1874. After his death in 1875, the cone split open and I potted two of the seeds. They grew so well that, two years later, I sent them to our old Schoolmaster and Clerk, Frederick Marshall. One he planted in the Churchyard and the other on the slope of the Mount, and my amazement was great when I returned to Eversley to find the tiny seedlings had turned in the space of twenty years into Forest trees." The trees now stand at well over 100 feet tall.

The village school is Charles Kingsley's Church of England aided Primary School. When Charles Kingsley came to Eversley as Curate in 1843, few people in the village could read or write. The village cobbler, Snuffy Clapham, taught some children in his cottage in Fox Lane, as did Sarah Winter at hers in Bramshill. Kingsley began evening classes in the summer house on The Mount, overlooking the church, assisted by Frederick Marshall, whom he later sent to Winchester Training College. 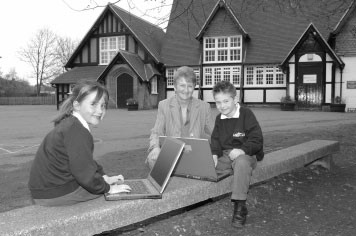 Largely due to Kingsley's efforts, the Parish School was built in 1853, on common land entrusted by Sir William Cope, the Lord of the Manor. Frederick Marshall became the first schoolmaster in Eversley, at a salary of £35.00 a year. The school was soon acknowledged as one of the best in the area and children from neighbouring parishes were allowed to attend on payment of 2d a week.

Over the years the school has been enlarged and has recently added a sixth permanent classroom and a seventh temporary one. In 1999 the school won a prestigious 'Named School Award' in the Minister for Education's Annual Report, and has also been awarded Beacon status. In 2002 it was ranked 2nd highest achiever in Hampshire and was number 37 in the top 100 schools in the country, beating more than 18,000 others.

In 1919 the village held a great pageant to celebrate the centenary of Charles Kingsley's birth, and its patrons, led by Queen Alexandra, read like a roll call of the great and the good of the day. 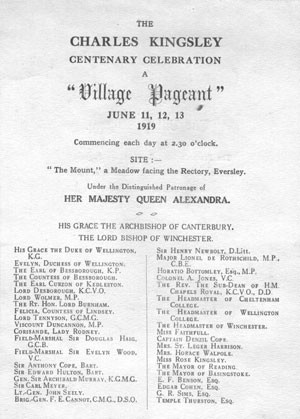 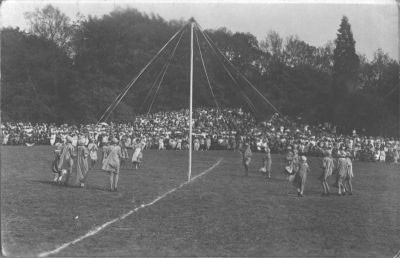 One disturbing tale from many year ago concerns a local villager who was walking from the road outside St. Neot's, taking a shortcut to Bramshill Road over desolate and boggy ground. This person noticed a hat lying on the ground, and on picking it found beneath it the head of a man who had sunk into the bog when crossing that lonely track, and died before he could attract attention to his danger.

The name Tally Ho! is an old English hunting phrase, that was used to excite the hounds used in the hunt when out deer hunting. Interestingly, there is another pub of the same name in Trumpington, Cambridgeshire, with a picture of a Spitfire on its signage. 'Tally Ho' was the call to arms of the WWII Spitfire pilots from the nearby airfield.

(With thanks to C. Elizabeth Cottingham, who wrote A Little History of Eversley in 1930)

Rob has come to us from working in a 5 star hotel, he used to run pubs, so has plenty of experience in our field. Rob's the one who cracks the jokes on the busy shifts - which keeps us all smiling. Rob is a proper family man and loves to take his kids out on his days off. He loves a drink and good food, which suits us perfectly!

Sarah, has been with us for over a year now. And has become a loving member of the Tally Ho family. No matter rain or shine, Sarah will be there to make you laugh and smile.

Fin is a staple returning student. He loves pouring pints and having a chat behind the bar. When he isn't here with us, he is studying music at Swansea University and he's even part of a jazz band.

Roberto is our Grand Papa of Eversley. He's a real family man and when he's not at work you'll probably find him watching his mighty Chelsea playing football. If you are ever unsure of something at the Tally Ho, ask Roberto!

Neil has been at the Tally Ho for nearly three years, having previously trained here in his youth, and now heads up our kitchen team. When he's not creating superb dishes, Neil is usually found cracking jokes to the rest of the team.

Przemak is the clown of the kitchen, when he isn't plating up amazing food. He can be found making everyone laugh and lifting their spirits.

Chris is a passionate chef with a keen eye for detail. He loves travelling around the world in his spare time. He also has a keen ear for music, which he shows as he is the resident kitchen DJ, with the right songs for any occasion.