The Combermere Arms takes its name from the adjacent abbey which was founded in 1133 by Hugh de Malbanc, Lord of Nantwich. At the Dissolution of the Monasteries, the 22,000 acre estate became the property of Sir George Cotton as a reward for his service to Henry VIII. Most of the abbey buildings except the abbots' house and hall were pulled down, and the house has undergone several remodellings since, although an exceptional oak hammerbeam roof and screen still form part of today's house.

The most notable of the Cottons was Sir Stapleton Cotton, born in 1772, who became a brilliant general and fought under Wellington at the Battle of Salamanca. He was created a peer for his services, becoming Viscount Combermere, and was also Governor General of Barbados and Commander in Chief of Ireland and India.

Sir Stapleton was in military service for 73 years and fought in 17 battles, and was so proud of his prowess on the battlefield he incorporated his medals on his coat of arms, as you can see on the pub signs. Whilst plainly an exceptional man, he was noted for being vain, and was caricatured by Thackeray in his work 'The Book of Snobs' as Sir George Tufto, whose "breast sparkled with innumerable decorations". 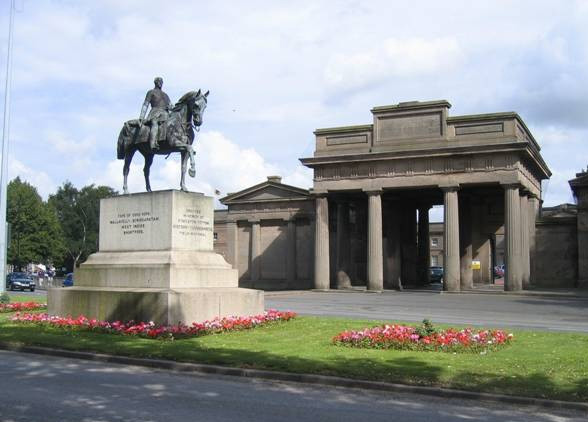 An equestrian statue of Sir Stapleton stands at the end of the Grosvenor Bridge in Chester, opposite the entrance to Chester Castle. It is his coat of arms that gives the pub its name.

Strangely, it's been difficult to find records of the pub before the turn of the century. There is a useful book for local historians called 'The Alehouses and Alehouse Keepers of Cheshire 1629-1828', and although the Combermere Arms is mentioned in the index, sadly no detailed entry for the pub is included.

The 'Cheshire Village Book', compiled by the Cheshire Women's Institute in 1990, states that the pub was built in 1540, and the Cheshire Conservation Department reports that the present building incorporates late 17th Century and early 18th Century work, with some original exposed joists. But that's about it so far, so we'd be most grateful for any interesting titbits and especially any early photographs of the pub.

The Cheshire Village Book also records a frequently-told story of two clergymen who sorted out a troublesome ghost in the pub by trapping it in a bottle (Ghostbusters?). They then buried the bottle under the front steps of the pub, and legend has it that if it is ever broken or disturbed, the ghost would be released.

I'd been told this story via email from Lizz Easton in Australia, a former Burleydam resident, so I phoned the builders on site to tell them to keep an eye out for any suspicious bottles - and strangely enough they were digging out the front steps there and then - but sad to relate, the only bottled spirit they came across was behind the bar. The temptation to actually plant an old bottle and scare-up the boys was of course immense. The steps and old front door have now been removed, and are replaced by a 'cellar drop' where barrels of beer are delivered. 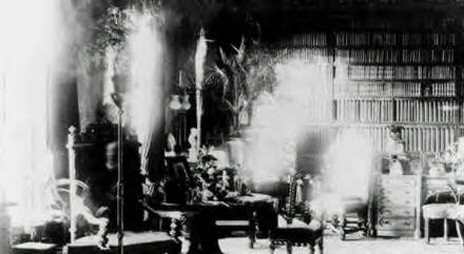 Another ghost story concerns a photograph taken in the library of Combermere Abbey in 1891 by Sybell Corbet. The figure of a man can faintly be seen sitting in the chair to the left. His head, collar and right arm on the armrest are clearly discernable. It is believed to be the ghost of Lord Combermere who died in 1891, having been struck and killed by a horse-drawn carriage. At the time Sybell Corbet took the above photo, Combermere's funeral was taking place some four miles away.

The photographic exposure, Corbet recorded, took about an hour. It is thought by some that during that time a servant might have come into the room and sat briefly in the chair, creating the transparent image. This idea was refuted by members of the household, however, testifying that all were attending Lord Combermere's funeral. 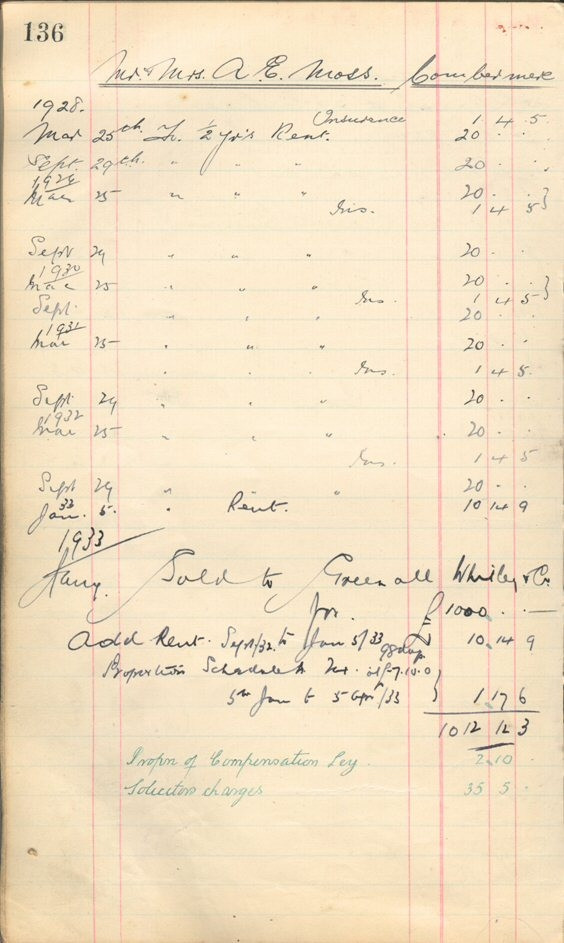 In 1919, Sir Kenneth Crossley, founder of the Crossley Car Company and an MP, bought the estate, which was then five thousand acres. In 1992, his great-granddaughter, Sarah Callander Beckett inherited the estate, and lives in the Abbey with her husband, Peter Beckett.

The chap who owns the farm behind the pub, Ian Barton, told us that his grandfather, Argy Barton, bought the pub along with various other farms and parcels of land in 1917 from the Combermere estate for £1000 - less than one-thousanth of its value today. It was run by a tenant before being sold to Greenalls in 1930. In 1948 May Kendall of Nantwich was the licensee, on a yearly rate of £30.

Wesley worked for B&P many moons ago but has since returned from his ventures of running a few pubs in the Whitchurch area. Wesley has lived in Whitchurch for 10 years and the Combermere has been his local and favourite. When Wesley is off he is either running a 10k or spending time with his 3 girls.

Ash joined the Combermere in April 2022 and has taken like a duck to water; he's quick and nimble around the pub and has a keen eye for the detail. Ash grew up in Bickerton and went to Malpas school. He has worked in hospitality for over a decade now around the North West. He also drinks far too much coffee, but don't we all...

Sue has worked at the Combermere now since November 2012 so is a fully fledged long standing member of the crew! Living on the farm around the back of the pub does have its benefits; not far to stumble home after a few of her favourite G and T's! Fun Facts: Sue used to ride Italian motorbikes in her spare time, has a greyhound called Cheeky and a cat called Stinky!

Toby lives in Stapeley and joined us in September 2020. Knowledgeable and always on hand. If you like a flat white coffee, Toby is your man!

Johnny first walked through the doors of the Combermere in 2005 as a KP, but has since taken the plunge and donned his whites and with great success, as he is now our wonderful Head Chef! Johnny is an absolute whiz in the kitchen, helping the Combermere win 3 Food Development competitions, and when he's not cooking up a storm here, he enjoys spending time with his lovely wife Lauren and beautiful baby boy, Eric.

Lovely Simon is another Brunning and Price old hat after originally working at our sister pub, The Combermere Arms, and then making the move over to us at The Fox and working his way to becoming Sous chef last February. Simon (or Simee as he's affectionately known) has rightly won many of our prestigious fox awards as 'Nicest guy' and ='most likely to cheer you up when you're feeling down' Going against all scary chef stereotypes, Simee is the teddy bear of the kitchen.

Tony has come back to us from the Morris Dancer with a wealth of experience and has been a part of the Brunning and Price family for many years. He's headed up the kitchen at our sister pub, the Combermere Arms near Whitchurch for eight years but is always around to lend a helping hand. Tony runs a tight ship and is a hugely talented chef. He is no stranger to cooking up a storm in the kitchen and has Michelin star experience under his belt having worked at Harvey's in Bristol, Crewe Hall and Rookery Hall.

Sandra Dykes has been involved in the pub trade in one capacity or the other for years. Married to Gerald, who works on a local farm, they have two grown up children. Enthusiastic revellers, Sandra always loves a party, and is always the one up for anything even if her legs sometimes aren't. She has been with the pub since we started and is a great asset.

Elaine is one of the pub characters, with a naturally sunny personality which comes from doing so much gardening. She is a bit of a badminton player as well as doing keep fit classes, so puts the rest of us couch potatoes to shame.

Trish worked at the Combermere for ten years before we arrived on the scene, and finds it confusing navigating her way around the pub. She’s a local lass who cycles to work to keep fit. 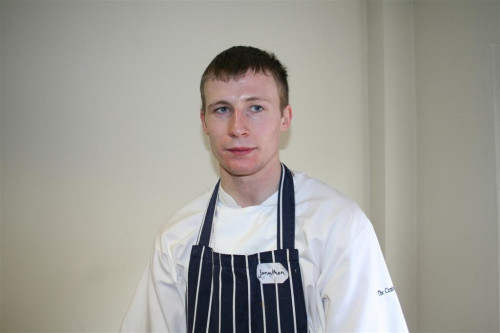 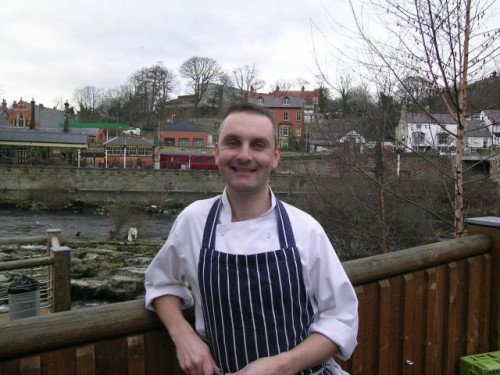 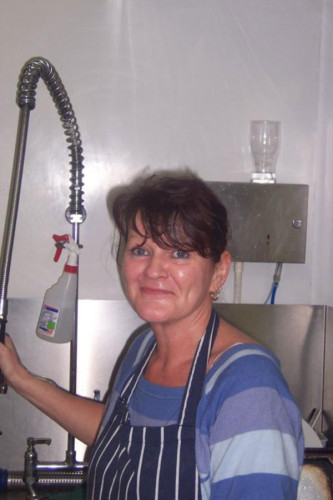 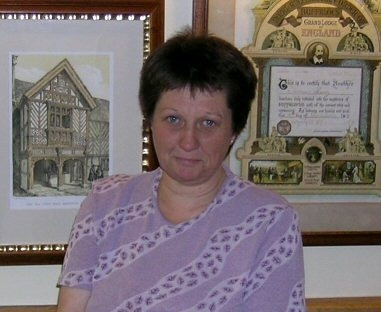