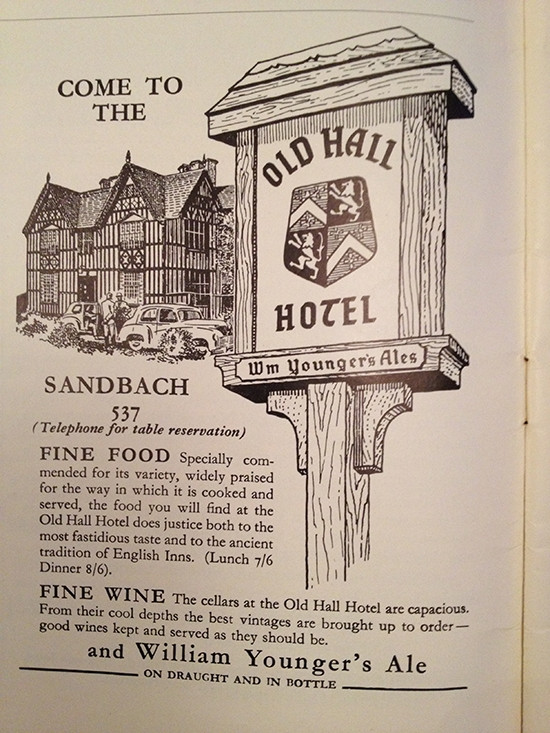 An advert of Old Hall which featured in
Cheshire Life in July 1955. Lunch was
35p in today's money, and dinner was 45p!
Thanks to John Woodward for sending us this. 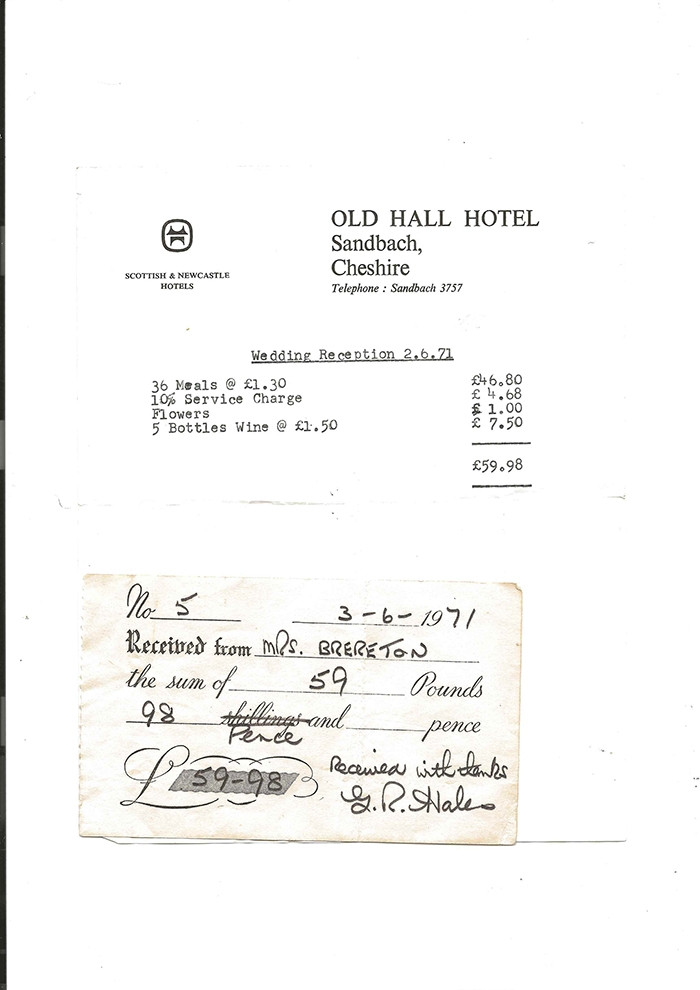 Jill, one of our cleaners had
her wedding reception at Old Hall
in 1971 and came across this the
other day...

Sandbach Old Hall was built in 1656 by John Radclyffe, the son of Sir John Radclyffe, Lord of the Manor of Sandbach, who secured Sandbach's market charter from Queen Elizabeth I in 1579, for a Thursday market and three fair days (remarkably, the Thursday market still continues to this day). Presumably, when it was built it would have been called Sandbach New Hall, but time is a cruel master....

The house was built on the site of a previous manor, home of the Sondbache family, which had been built in the 13th century but which had been destroyed by fire. Interestingly, when we were restoring the roof, a great number of the stone roofing flags appear to have been smoke-damaged, and it's not inconceivable that they could have been recycled from the earlier building. 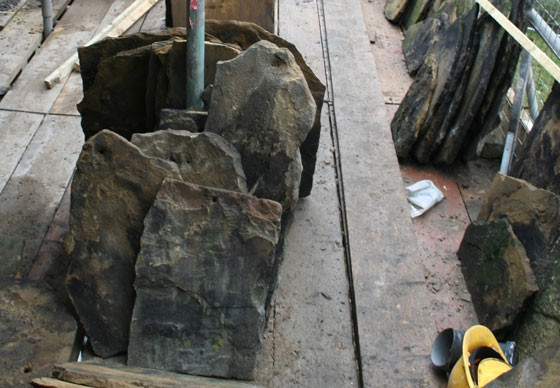 There is archeological evidence of an even older building on the site dating from the 12th century - a wattle and daub rectangular building with a turf roof, which apparently served as the seminary for priests attached to the local minster (now St Mary's church).

In the 18th Century an extension was added to Old Hall by a descendant of Sir John Radcliffe, to create a tavern known as the Three Tuns Inn, which became famous for brewing a strong malt liquor - meaning that the hall has been dispensing hospitality for some 300 years now.

During the Second World War, Old Hall was requisitioned to house American officers, and General Patton, who was based for a time in Knutsford, visited his officers here on a number of occasions. On an upstairs window pane, one of his men has scratched an inscription recording one such visit.

The building has been described as being a near perfect example of Elizabethan wattle and daub architecture, and is probably the last example ever built. It has some lovely features within the building: there are two Jacobean fireplaces, one of which has an adjacent priests hole with a concealed door, lots of original oak panelling and an original oak baluster staircase, on which someone once sat long enough to carve 'IB 1828' into the wood. 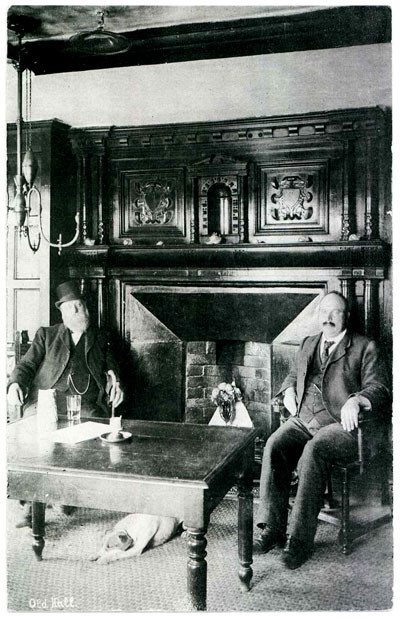 The gentleman on the left of this photograph
is John Bebington, who at the time was the
landlord of Old Hall. On his left is his son,
John Bebington Jnr, and under the table is
Pugsey (or Pugsy) the dog. The information
was given to us by John senior's great
granddaughter and Sandbach resident,
Margaret Snape- many thanks.

In the cellar is a tunnel that is purported to lead under the main road to St Mary's Church opposite. The tunnel is believed to have been intended for priests escaping persecution, but legend has it that it was also used to smuggle girls into the coaching inn. A further tunnel is said to exist linking Old Hall with a house on Front Street, but it has not been found.

When we first came across Old Hall, following a tip off from Mr Terry Price, it was in a very sorry state! ..it had lain derelict for some four years, and a local pressure group, the Sandbach Old Hall Action Group, were campaigning hard to try and force the then owners to at least make the building water-tight as it was deteriorating rapidly. The Grade 1 listed building had been placed on English Heritage's 'At Risk' register, and given Category A status - their most extreme grading.

The whole process of purchasing, planning and restoration took almost two years, but it has been immensely gratifying breathing new life into such a beautiful building that had come so close to being lost for ever. 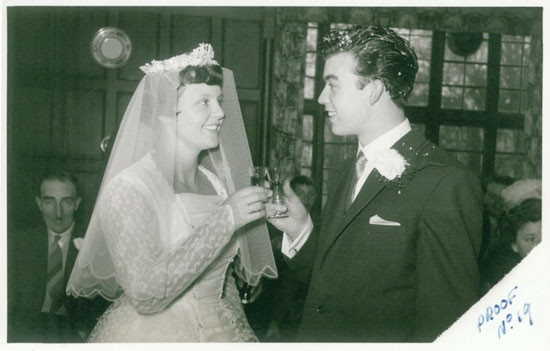 Caroline Bowyer, a friend of the pub,
tells us her grandparents had their
wedding reception at Old Hall fifty
years ago.

Hannah started off With B&P 10 years ago and learnt the ropes pretty quickly, so then decided that a management role was the way forward in life. She has done seven years at our sister pub, Sutton Hall along with a further two years at Worsley Old Hall. As Hannah has gained her managerial experience at both Sutton Hall and Worsley Old Hall it seemed only natural that she adds our third â€˜Hallâ€™ to her list. A dab hand with an Ordnance Survey map due to a Geography degree, she knows her way around a pub. She is sure to be destined for greatness, and most certainly with a gin in hand.

Charlie is our Cheeky Chappie Assistant Manager and joined us from our sister pub and friends at Sutton Hall, Macclesfield. He has bought with him a real can do attitude, bags of enthusiasm and injected some youthful banter into the team. Charlie's idol is the one and only Sir Elton John and in his spare time can be found in the Karaoke bar blasting out "don't go breaking my heart" to anyone who will listen.

Originally an Essex girl who decided to spread her wings 'up north' a few years ago and hasn't looked back since! Clare has been within the company for 4 years and has worked at a few well known Brunning and Price pubs... the Wharf, and Sutton Hall (just to name just two) before settling here with us a year ago, and aren't we gad she did! Clare is our resident dog walker/Christmas fairy so you'll usually find her out in a field planning new routes, and getting her wellies dirty/stuck or talking all thing Christmas over the phone to customers. When she's 'off duty' Clare enjoys the great outdoors (climbing mountains) and binge watching series on Netflix with a vino in hand...Life's all about balance right ;)

Well well well, what can we say about our lovely Seonaid? Plenty thatâ€™s for sure! Seonaid is like part of the furniture at Old Hall and has worked here since the near beginning, providing great pints and banter to our lovely locals on a Friday night...and the place just wouldnâ€™t be the same without her! When sheâ€™s not with us in the evening, Seonaid works as an accountant by day, and also manages to find some time to fit the gym in 5 times a week. Needless to say, all this hard work deserves a drink or two after a busy shift so you might find her with a glass of fizz, or a G&T in hand... or both ;)

Adrian is the life and soul of the kitchen. He loves to keep fit by running and swimming and generally is a man of action! He's been a chef for around 6 years and joins us from our sister pub the Hayhurst Arms in Bostock Green.

Yvonne lives with her partner Colin, son Joe and a Guineau pig called Beep. When she is not busy with family, pets or work, she loves to shop. Her favourite cheese is Brie.

If you are planning on bringing a dog, please make us aware so we can assign a specific table for you. 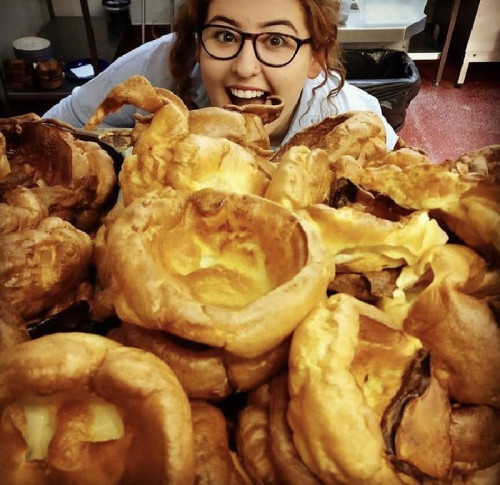