The Inn at Shipley is a three storey Georgian building dating from 1771, which was built by Thomas Farmer Thornes.

The Thornes family had for many centuries been a prominent Shropshire family. From the 15th century and for several subsequent centuries Shelvock Manor, in Shelvock, north of Shrewsbury, was their family seat. One of the most prominent members of the Thornes family was Roger Thornes, who in the 16th century was described as "Wise Thornes of Shrewsbury for that both town and country repaired to him for advice".

Though owner of Shelvock, Roger Thornes retained his family connection with Shrewsbury, and seems to have lived principally in the town, where he had a house in Raven Street, just opposite School Lane. He was a Bailiff six times.

Richard Thornes was Sheriff of Shropshire in 1610. Francis Thornes, son of the Sheriff, married Beatrice, eldest daughter of Sir Andrew Corbet of Morton Corbet, on December 12, 1625, at Moreton Corbet, when he was 19 and she was 15. When the English Civil War broke, Thornes actively sided with the King. 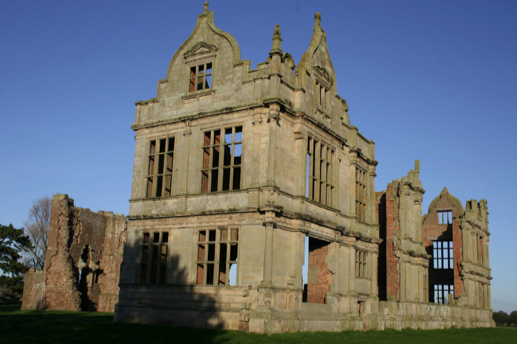 The ruins of Morton Corbet Castle,
Shropshire, where Francis Thornes
and Beatrice Corbet were married
in 1625

Francis Thornes was one of many county gentlemen captured when Shrewsbury was taken on February 22, 1644 or 1645, by the Parliamentary forces under the command of his first cousin, Thomas Mytton of Halston, and he had to pay £720 for his estate. After this, the fortunes of the Thornes family declined.

Thomas Farmer Thornes in 1771 was nevertheless described as a gentleman, and he and Elizabeth enjoyed a number of servants.

The site of the 1771 property already has a number of buildings on it, and he may have acquired the land from one of the local estates or it may have been part of the landholding of the next door property, Shipley Hall. The three storey house was slotted between the sandstone and timber-frame farm buildings which were adapted and remodelled to become useful ancillary storage. We know this for several reasons. Firstly, the name T.F.Thomas and datestone of 1771 is carved onto a stone block on the front of the building, but additionally, there is an inscription etched into the window glass within a first floor window which reads 'Joseph Thompson newly leaded this window 1771'. This is authentic. 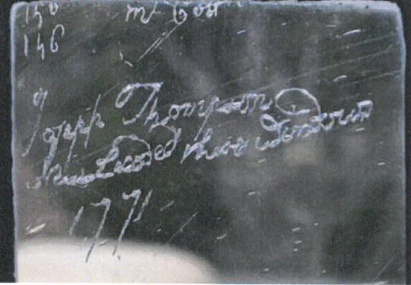 There are a number of wills and records in which T.F.Thornes is mentioned. Archival data indicated that he was an Attorney-at-Law, and he must have built the house shortly before his marriage to Elizabeth in 1772, but the only lived there for 7 years before he died in 1779.

At that time the house may well have been sold to Thomas Boycott, who we know later acquired the manor and lordship of Shipley on 25th July 1829. In a valuation of his estate in 1798, a property named Thornescroft (presumably after Thomas Farmer Thornes) is mentioned.

Thornescroft was sold on 26th June 1918 by direction of Mrs Wight-Boycott, and was the name of the restaurant when we acquired the property in 2013, although the name was not felt to be engaging enough as the name of a pub, so we renamed it the Inn at Shipley.

Kayleigh describes herself as a hostess, and we can't really think of a better way to describe her! If she is not at work looking after our guests, she spends much of her free time hosting friends at home, BBQing through ALL weathers or in a pub herself with her husband Jon. An ever smiling face behind the bar, Kayleigh brings a big energy into the pub. Her love for good food and even better wine are infectious so make sure you come along with empty bellies!

Matt, lovingly known as Matty to his colleagues, is one of our rising stars. Having started with us as a part-timer whilst studying Geography at Swansea University and having a brief spell elsewhere at a trendy cocktail bar, the call of the Great British pub was just too great. Matt came back into the fold where he has quickly worked his way up the ranks. As a lovely of good beer & cocktails, it was only natural that he became 'keeper of the bar' where you will likely find one of Matts Marvellous Creations to try!

Amy blew into the pub back in 2020 when we all needed a much warranted shake up! Since joining, she has been an ever smiling face behind our bar and is also queen of the catch phrase 'I love that for you!'. Amy has worked in the hospitality industry for the past 7 years, so this isn't her first rodeo! When she isn't here with us, you will find Amy along with new husband Alex exploring new bars and restaurants... She likes to stay fully up-to-date with the latest gin trends - it's research, of course!

"All good things come in small packages" and Liv is no exception. A local lass favoured by so many of our customers for her happy, smiley nature, Liv is a B&P natural. Outside of work who knows where you will find Olivia, the little globetrotter is usually having a ball somewhere beautiful in the world with all her family and friends but always with a G&T in hand!

A walking encyclopaedia of current affairs both in the pub and out, Lucy is our lady in the know! With her infectious smile and 'joie de vivre' it is easy to see how see has worked her way up the ranks. With family at heart, Lucy is always out an about experiencing all of what the county has to offer whether that be with her little niece and nephew or partner Ryan.

Jack joined the Woodbridge in May 2013 after starting his career as a banqueting chef at Alton Towers. Originally from Stoke, Jack is known in our kitchen for his extensive taste in music, especially the hard rock and heavy metal 'noise' we have to listen to if Manchester City lose! His ability to remain calm and approachable under a torrent of checks means he is the man you rely on during a busy shift. When he is not at work you will find him enjoying an ale somewhere or wining and dining his lovely wife Tawry.

Sweetness and spice and all things nice is Oje both in his cooking and personality. Joining the team back in 2019, Oje brought his cool as a cucumber nature to the kitchen. As a chemistry graduate from the University of Hull, his interest in creating a sparking reaction, led him to the world of gastronomy. However Oje's passion for cooking started much further back, watching his grandma create magic in the kitchen with her signature jollof!

Snapped up before she had even left college, Lauren became our youngest chef and little sister to the whole Shipley team. Joining our team part time as an apprentice, she has quickly worked her way up, conquering each section as she goes. 2022 is the year that she is going to take on the mains pass. A BIG music lover, Lauren (or Lozza to us!) spends most of her shifts fighting over the aux cable so she doesn't have to listen to that other rubbish - her words Chef, honest!

You are far more likely to hear Zak before you see him, especially the roar of his motor! Not just a car lover, Zak has been a cooking enthusiast from a young age, and when it came to education, there was no other path for him. Always ready to get stuck in, Zak is as much the life of the party as he is master of the kitchen. 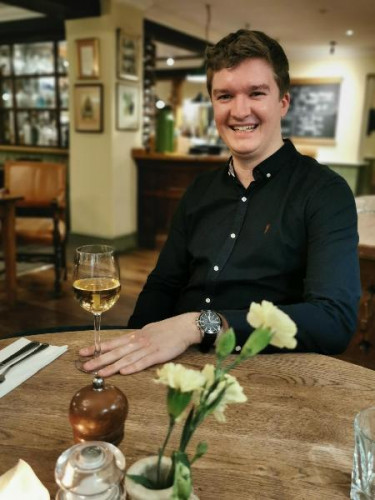 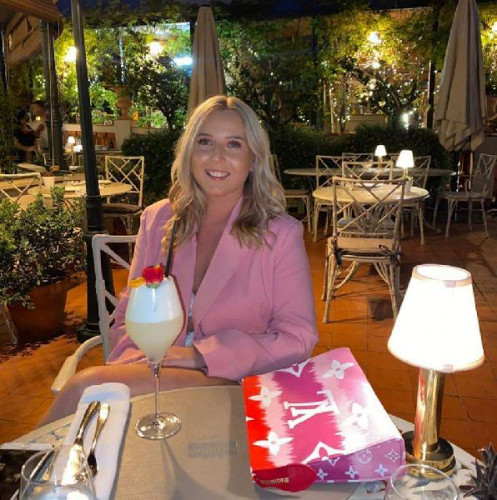 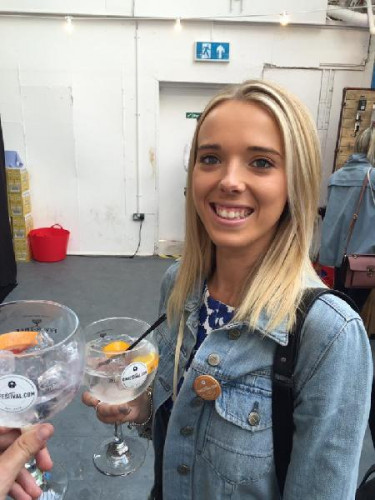