Bodfari itself is believed to be built on the site of the Roman military station of Varis, and has yielded numerous Roman coins, urns and other relics. Roman cremation urns were found in the grounds of Pontruffydd, to the south-west of the village, a hoard of silver denarii were found to the west of Bodfari, and a Roman bead was found in the Garden of Hill View, a local residence.

The settlement at Bodfari was for many centuries tiny: indeed estate maps from 1738 only record four dwellings around the church, and a Tithe survey of 1845 shows that it had grown barely at all.

The Church of St Stephen

The Church of St Stephen, which lies at the heart of the settlement, has its origins in medieval times, dating back to at least the eleventh century. 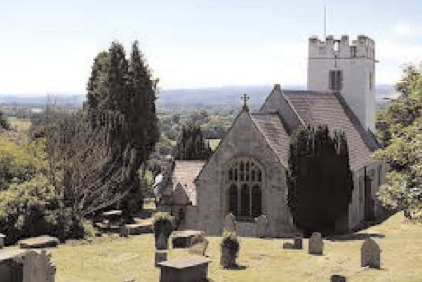 Only two buildings other than the church are recorded in detail as being of any age. Our own Dinorben Arms, nestling below the churchyard, has a date of 1640 above the lintel, and is a brick building in the vernacular tradition that was remodelled in the nineteenth century. The Old Rectory, to the north-west of the church, is late eighteenth century, and Hafod-tan-yr-eglwys, formerly known as Ty-gwyn, lies immediately west of the churchyard and may have a mid-eighteenth origin. It was termed a 'poor cottage' in 1843, but is now a fine Regency-style property.

In 1843, the Dinorben Arms was the part of the estate of Lord Dinorben, and was tenanted by James Edwards. 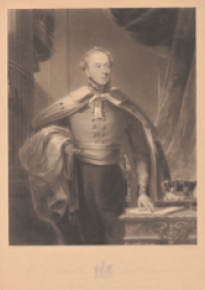 William Lewis Hughes, Nov 1767 to Feb 1852, the 1st Baron Dinorben, was an immensely wealthy copper mine owner, Whig politician and philanthropist, establishing a free school for local girls and championing the poor.

He became the MP for Wallingford, a seat he held until 1831, and was ADC to Queen Victoria. He was the Colonel of the Anglesey Militia. Lord Dinorben died in February 1852, aged 74, and was succeeded in the barony by his younger but only surviving son, William. However William was disabled and the title became extinct on his early death only eight months after succeeding in the title.

There is a Mausoleum in the churchyard at St George, Kinmel, dedicated to the 1st Lord Dinorben, carved with his coat of arms and inscribed with his motto 'RHAD DUW A RHYDDID', which translates as 'The grace of God and Freedom'. 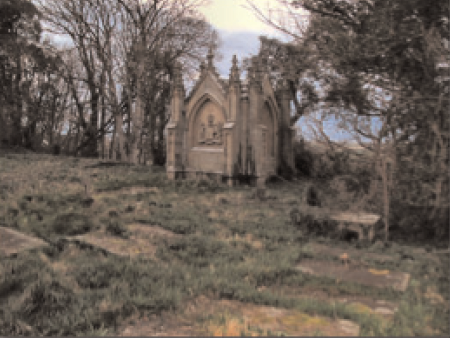 We have very kindly been given permission to use this coat of arms as our emblem and you will see it featured above our door and at the top of this page.

Local rector Lloyd Hughes, a keen local historian, has undertaken invaluable research into the history of the Dinorben Arms. Above the door of the pub used to be the legend Dinorben Arms Hotel Established 1640', but the earliest reference Lloyd Hughes has found is from the Church Burial register:

1. The Church Burial Register notes a certain William Jones, Inn Holder of 'Llan', whose funeral service was held on 10/06/1772.
After William Jones there was a long gap, until the 1841 census, where we find listed a lady by the name Mary Sillitoe, Publican, of Bodfari but not born in the County. We may associate her with the Dinorben by reference to a Burial register entry which refers to her burial on 03/01/1845. Here, the name Dinorben is given as the actual address.
Mr J.L Roberts, a Victorian historian, informs us that Lord Kirkwall sold the Lleweni estate in about 1811 to the Rev. Edward Hughes of Kinmel. His ancestor H.R. Hughes Esq. had extensive lands in Bodfari and Aberchwiler. He later became Lord Dinorben after William died and so the Dinorben Inn, Bodfari was named'. We do not know how much later but on the evidence here under consideration we may state that the Dinorben Arms gained its name sometime between 1811 and 1845, before that it may have been known as the Seven Stars.

Stephen Whitfield, a local resident and historian, found an entry in the Chief Constables Office (Mold) Licenced Returns Book dated 1892. At this time it states that the Dinorben had 3 beds for travellers and accommodation for supplying refreshments for 30 persons. This shows it was more than just a village pub, but rather what we might properly call an inn.

The Dinorben Arms in the modern era

Stephen Whitfield, grandson of former Dinorben Arms licensee John Whitfield, reports that pigs had been kept at the back of the pub since at least the beginning of the century. 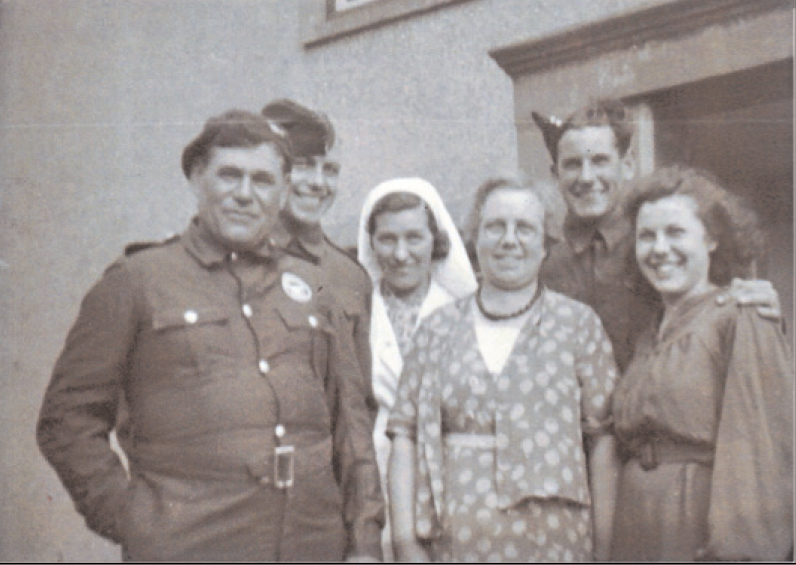 This is Stephen's grandfather on the left. He was in the Observation Corps looking out for and reporting on sightings of enemy aircraft. The photo was taken in 1942 outside the pub, and shows John Whitfield with his wife Elsie, together with their children Sybil, Len and twins Les and Joan. 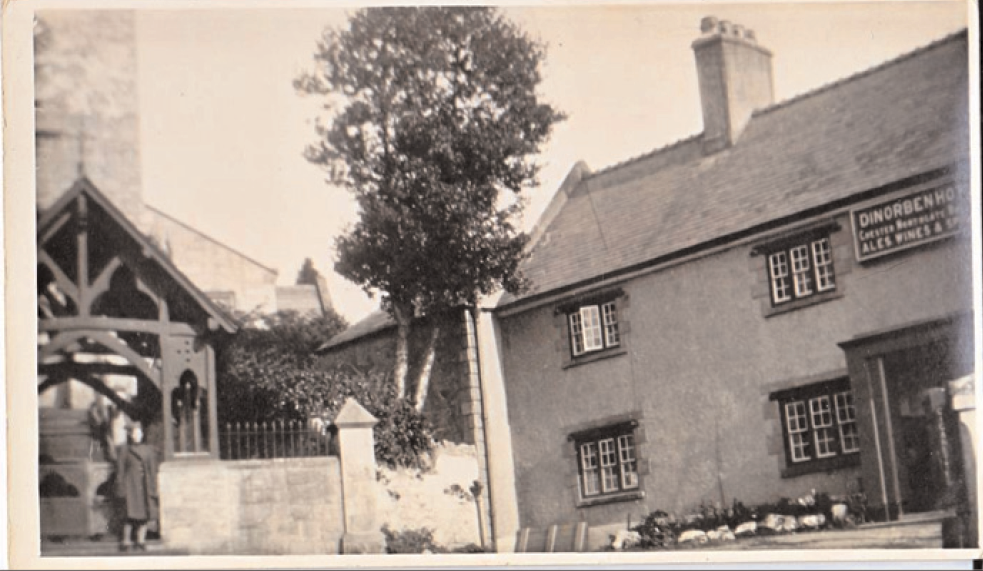 At some time the pub was called the Dinorben Hotel, and this sign shows it selling beer from the Northgate Brewery in Chester. If you look closely you can just see a cigarette machine in the entrance. 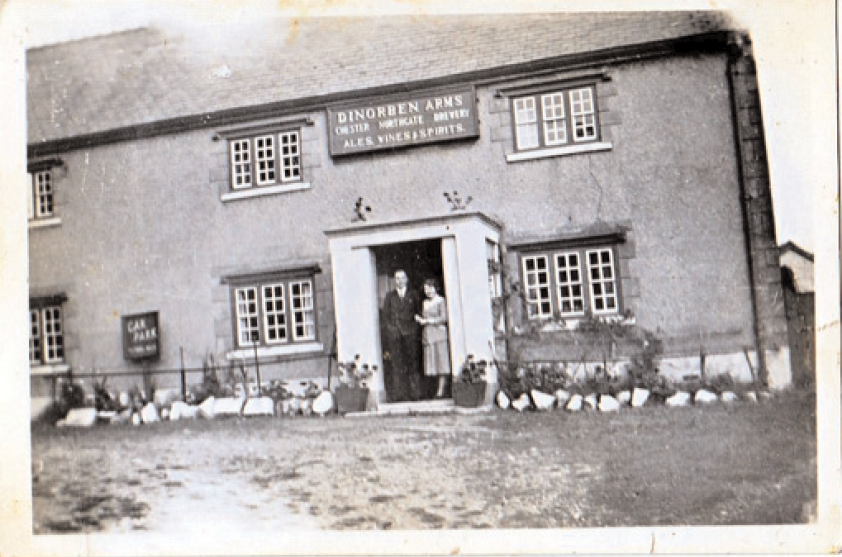 When Stephen's grandparents had the pub, it was clearly the Dinorben Arms. 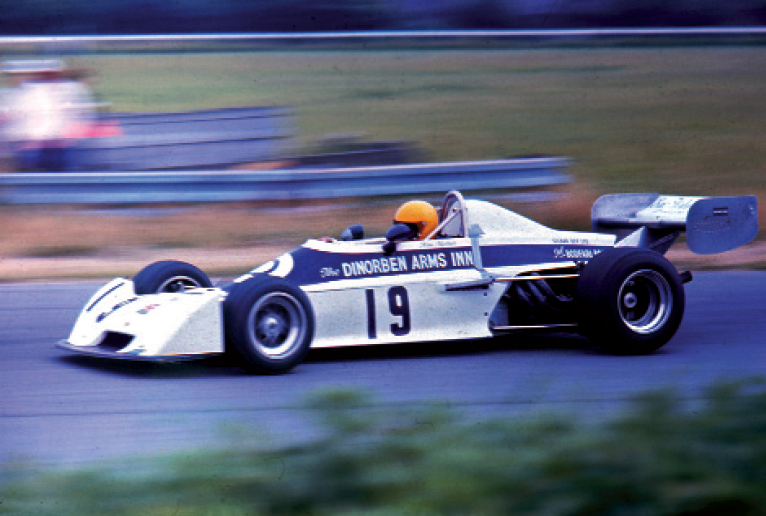 A little closer to the present day, the owners of the pub in 1977 took it upon themselves to sponsor a very promising driver from Lancashire called Kim Mather, in national and international Formula 2 racing. Here you can see the Formula 2 Chevron emblazoned with the pub name whilst racing at Aintree.

Like all buildings of a certain age, the Dinorben Arms is reputed to have attracted its share of ghouls and ghosts, much as barnacles attach themselves to the underside of a ship.

First out of the blocks is a spectral woman in black, who has very long and very dark hair down her back, who is always seen in an elegant sweeping black dress, and who for some reason prefers the upper floors of the pub and stays away from the ground floor.

Next we have a small child and an adult man, who are often seen gliding the corridors and upper levels of the pub in the same way the black lady does.

All three of these are apparently entirely benevolent, unlike our fourth contender, known as 'The Uncanny Watcher'. His presence is said to be uncomfortable and he's generally an all-round nuisance. He is not a natural host.

And so to the present day...

The Dinorben Arms in the 1980s and 1990s was an extremely popular pub, and occupies a special place in many people's memories. Originally a small village pub next to the church, many Alpine-style extensions had been added, with a large balcony giving dramatic views over the surrounding hills. It had become very well known for its Smorgasbordstyle buffets which drew customers from as far afield as Liverpool - though one guest reports being bemused by the inclusion of cold baked beans in the Smorgasbord. 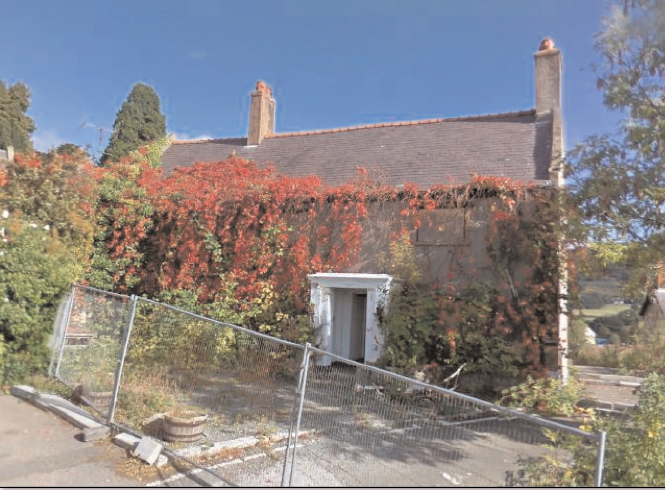 However, things appear to have slipped over the years, the property became progressively unkempt, and following a very poor summer, a foot and mouth crisis, and a prosecution for food hygiene infringements, the pub closed in 2007. We acquired the pub in 2015 after it had lain derelict for eight years, and all of the later additions had to be pulled down and restyled to create the pub that you see today.

With thanks to all that have helped us to get to know more about our pub and the surrounding area.

John has been with the company for a good few years, and has helped to run a number of our busier operations. He likes to put his trainers on and go out running to work up a thirst to drink good beer in a good pub, is very upbeat and cheerful by nature, and has put together a very happy crew. John is married to Angharad and they have a young son, Noah.

Ross started life at the Corn Mill as a part timer at the age of 17 glass collecting. He is a great host and always loves to look after the locals. He is a keen traveller and has spent time living and working in America over the summers, and then spent his winters skiing and snowboarding in the French Alps. He is a great singer and you can usually hear him on New Year's Eve singing a little Frank Sinatra or Michael BublÃ©.

Dave 'Trilby' joined us just before Christmas 2011 so he was thrown into the heat of a very busy kitchen: luckily for us he settled in well and proved to be a hard worker. We've been told that he has set his sights on the top job... so watch out Alun. On his days off he enjoys spending time with his children; Harrison, Jacob and Mia, eating good food, and going for long walks on the beach.

After working as head chef at the Woodlands Hall in Ruthin for 4 years, John decided it was time for a change, and after eating at the Cornmill, decided to join the B&P family. Having worked at our sister pub, the Dinorben Arms, John has joined us ready and raring to go. He takes a keen interest in cooking when at home as well as being a big music and Bollywood fan!

David followed Michal from The Morris Dancer and aren't we glad he did! An avid football fan (in particular Man Utd) he's an extremely hard worker, and one of the politest people we've ever met. He splits his time between making the kitchen sparkling clean, and plating up some beautiful desserts making him the the ultimate double threat!

After stints at our sister pubs 'The Dinorben Arms' and 'The Morris Dancer' Michal decided that life at The Hayhurst was just right for him. He's an extremely hard worker and the kitchen just wouldn't be the same without him, and his amazing sense of humour! 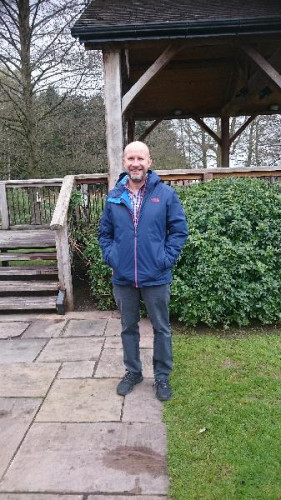 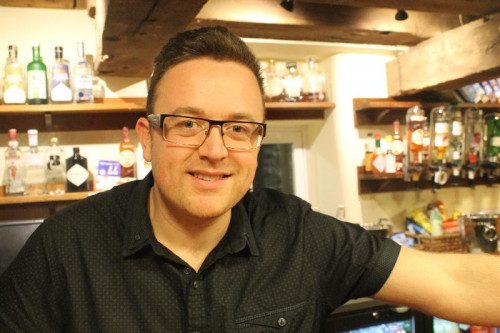 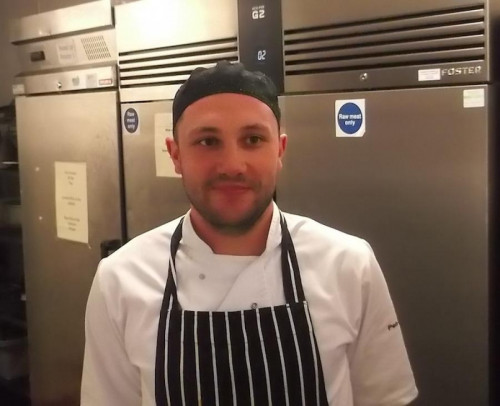